The Thick of It

The Department of Social Affairs and Citizenship (DoSAC) is a key government body with wide-ranging responsibilities on a number of different issues. However, the minister in charge of the department is constrained, bewildered and kept on the hop by a prime minister who can't go five minutes without changing his mind and by a variety of mishaps. Luckily, the party's chief spin-doctor Malcolm Tucker is on hand to keep them on-track with a barrage of swearing and formidable powers of media manipulation. 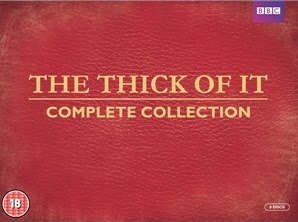 The Thick of It is a British drama-comedy that aired for four seasons and two hour-long specials, irregularly scheduled between 2005 and 2012. It was created by political satirist and comedian Armando Iannucci and has a constantly-evolving cast and scope. The first two seasons (of just three episodes each) are tightly focused on DoSAC minister Hugh Abbot (Chris Langham), his advisors Ollie Reeder (Chris Addison) and Glen Cullen (James Smith), his director of communications Terri Coverley (Joanna Scanlan) and, of course, the formidable Malcolm Tucker (a masterful performance by Peter Capaldi). The success of the early episodes opened up the scale of the show and more castmembers were added, including the shadow DoSAC department run by the opposition party and led by Peter Mannion (Roger Allam). Langham's departure under controversial, off-screen circumstances led to his replacement by Nicola Murray (Rebecca Front), a backbencher so obscure that even the detail-oriented Tucker doesn't know who she is.

The Thick of It is filmed with handheld cameras to give a semi-documentary, urgent feel to events and much of the dialogue is improvised to help with this feeling, although  there is a script which acts a guide. The show makes a point of never saying which party which character works for, although it's quite clear that the party in government in the first three seasons is Labour and the coalition in the final season is between the Tories and Liberal Democrats. Notably, the final season posits an alternate reality where David Miliband ('Daniel Miller') takes over as Labour leader and is immediately regarded as a key threat by his opponents.

The show is mostly comedic, with early storylines revolving around the incompetence of the minister and his staff, usually creating a PR catastrophe that Tucker has to solve through the use of clever media tactics and chewing out the team with a spectacular eruption of creative and sustained invective. This format starts to tire a little, but the show seems aware of this and changes things up, featuring episodes more revolving around political conspiracies and internal power struggles. The final season features a change of focus, with the opposition now in power and Tucker (after a monumental battle for his career in the third season) consigned to helping guide his party back into power. The show also features moments of drama and pathos, most notably revolving around Tucker's undermining in the third season and a more serious subplot in the final season about the death of a nurse and how the parties seek to cynically use it for their own ends. 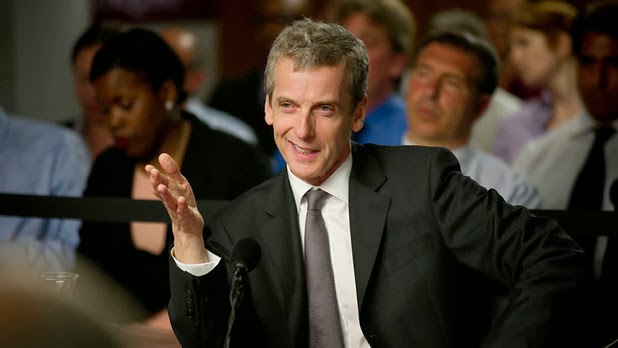 Most of the plaudits bestowed on The Thick of It are well-deserved. The acting is excellent from everyone, although it has to be said that both Capaldi and Roger Allam (whose compromised but well-meaning code of honour makes him the most likable character on the show, which isn't saying much) rise above the pack. The dialogue, whether scripted or improvised, is sharp and quickly-delivered and the storylines are fairly intricate. Events often spin on a single line of dialogue or an innocuous-looking phone call that backfires later on, so some attention to detail is required.

If the show has a weakness, it's that the constant tone of cynicism can at times be wearying. Yes, politics is a dirty game and even the most well-meaning, idealistic young politician probably does become despairing and sarcastic about the whole thing after a few years, but the near-total absence of any sympathetic characters (particularly in the final season, when everyone really is out for themselves) feels like it's going overboard. The constant level of incompetence from the characters also feels a little unbelievable after a while, with it being implausible that these characters could keep their jobs after even one of the 'omnishambles' that takes place, let alone dozens. Veep (made by such the same team), which can be seen as an American mirror to The Thick of It, handles this rather better by showing some of the characters to be at least basically competent in their roles and the disasters not being quite as catastrophic.

Still, these issues are made up for the sharp humour and extremely strong performances. The Thick of It (****½) is the strongest British political comedy since Yes, Minister and is unrelenting in its mockery of some very silly institutions that nevertheless control the country. The series is available on DVD in the UK and USA now.
Posted by Adam Whitehead at 16:23

Email ThisBlogThis!Share to TwitterShare to FacebookShare to Pinterest
Labels: armando iannucci, bbc, the thick of it