New SONG OF ICE AND FIRE covers for the UK

HarperCollins Voyager have unveiled new cover art for the Song of Ice and Fire novels by George R.R. Martin. 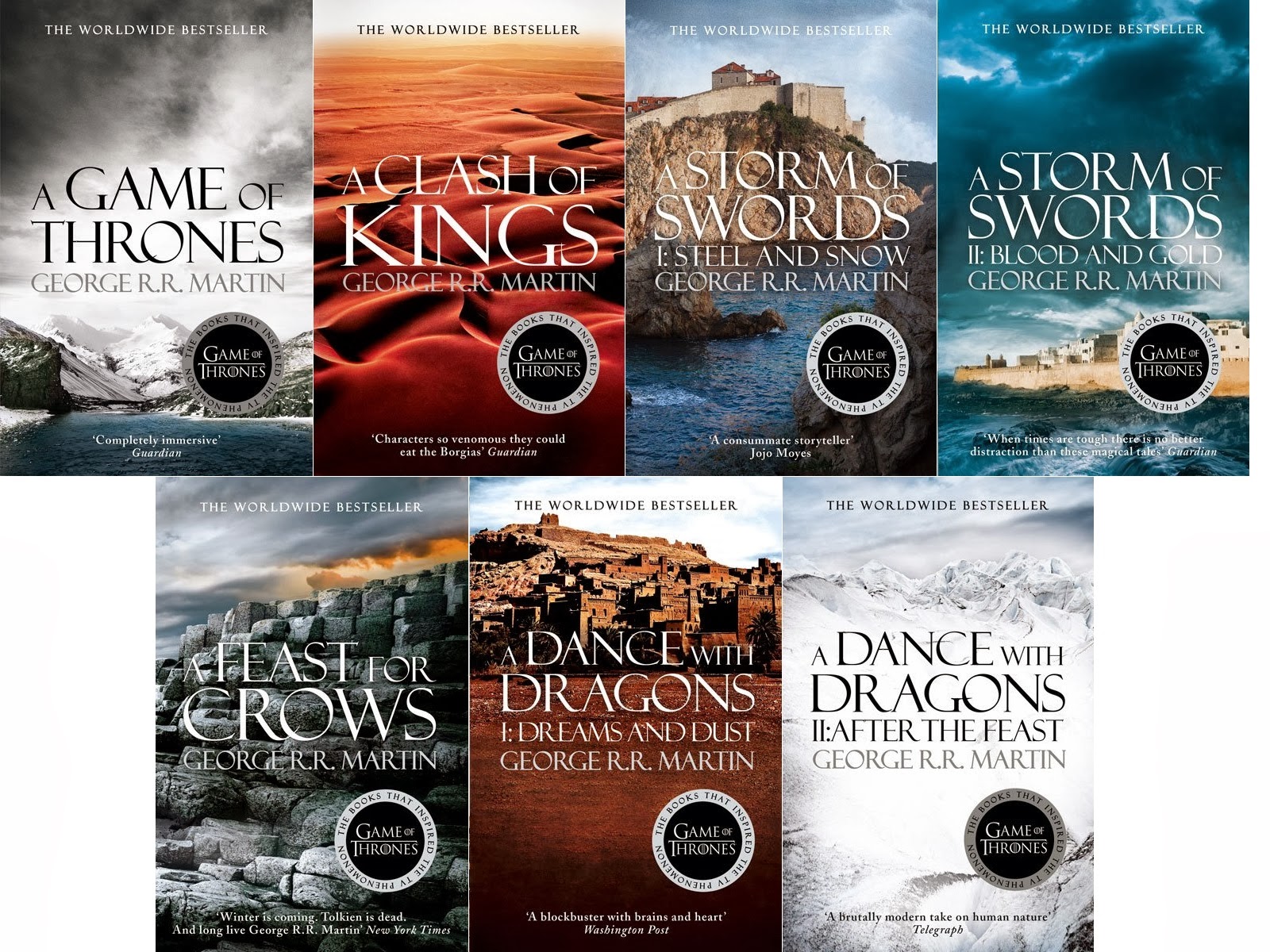 
The new books emphasise landforms and geography, unlike the previous covers which featured military and medieval iconography.

They're striking, but to my mind don't quite capture the feel of the series. In particular, A Clash of Kings featuring (presumably) the Red Waste on the cover is a little odd given that only one chapter takes place there. It's also mildly disappointing that Voyager still haven't recombined A Storm of Swords and A Dance with Dragons into a single paperback volume each, given how many larger or comparable novels out there are available in one paperback volume (The Wise Man's Fear, The Naked God, Atlas Shrugged, The Lord of the Rings, Diana Gabaldon's novels etc). I'm also hoping that the Game of Thrones tie-in note are stickers and not part of the cover, as they are rather incongruous. The current paperback set rather subtly and elegantly notes the GoT reference in a small section on the back cover, which is a better idea.

The new covers will be available alongside the previous ones and will not replace them outright.
Posted by Adam Whitehead at 12:01

Email ThisBlogThis!Share to TwitterShare to FacebookShare to Pinterest
Labels: a clash of kings, a dance with dragons, a feast for crows, a game of thrones, a song of ice and fire, a storm of swords, cover art, george r.r. martin, harpercollins voyager, news

Guaranteed those are not stickers, Adam. Clearly marketing towards the more general reader here, so it isn't surprising to (not) see ASoS and ADwD combined into their respective wholes. Most casual or non-genre readers are (at least to the mind of marketing departments) intimidated by novels of that size.

I would assume that the pictures are not neccessarily meant to be indicative of their repective books, but rather illustrate the wide variety of landscapes and the vast scope of the series as a whole.
I think they´re striking too, but I also hope the "Game of Thrones" emblem is removable.

Excellent covers for National Geographic....
Ridiculous for epic fantasy..
It could have been worse though.Imagine Game of Thrones in paranormal fantasy style of cover.Dany in front of a sexy nude Drogo with some blood in her lips and Stephenie Meyer's comment "Most epic sex scenes out there.Try it out girls."

Obviously aimed at making them more desirable for non-genre readers, just like the 'adult' covers of Harry Potter and Eragon etc.

I agree that they don't fit with the series at all ... they seem far too ... serene!

I doubt the marketing dept would countenance recombining the books because they can charge more this way :-/ Given the deep discounting on hardbacks on release, it's now often cheaper to buy the one volume hardback rather than 2 volume paperback, which is crazy.

Are these travel guides or fantasy books? Hard to tell with these covers...

I quite like these covers, they're different for a fantasy series. The only down side for me is the blatant "GAME OF THRONES" logo which I could do without but its obviously there for marketing reasons.

I actually quite like these as they are refreshingly different from most fantasy novel covers, but I couldn't find them outside the UK yet...