Paul Kearney has two new novels in the pipeline. First up is Umbra Sumus, a Warhammer 40,000 novel about Space Marines, which is a stand-alone right now but has sequel potential. The novel features a new chapter of Space Marines and is tentatively planned for publication by the Black Library at the end of 2014 or start of 2015. 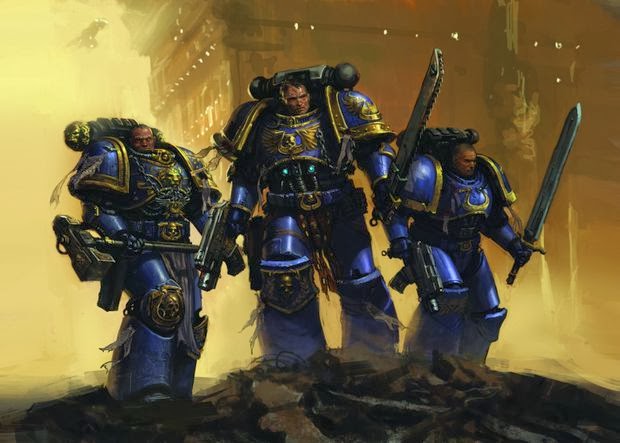 Paul has also been contracted for a new novel by Solaris. The Wolf in the Attic is a stand-alone fantasy novel and will be set in Oxford in the 1930s. From the sound of it, it marks Kearney's return to the stand-alone, less epic kind of storytelling of his first three novels. The blurb is as follows:


The novel is set in very early 1930′s Oxford, features Tolkien and Lewis as characters, and is told from the point of view of a lonely 11 year old girl. She’s Greek, a refugee from the sack of Smyrna, and one day discovers a Romany boy in her attic. The boy is a shape-shifter, and becomes her friend. The two begin to explore the world around Oxford, discovering things they never imagined existed. The girl, Anna, is obsessed by the Odyssey, and likens the Romany boy, Luca, to Odysseus.


The Wolf in the Attic will be published in Autumn 2015.

Paul talks about the process that led to the writing of the new novel here, and discusses his recent backlist reissues and Umbra Sumus here.
Posted by Adam Whitehead at 10:53

Email ThisBlogThis!Share to TwitterShare to FacebookShare to Pinterest
Labels: news, paul kearney, solaris books, the wolf in the attic

Hey Wert, I'd been wondering if you'd seen Kearney's interview over at My Bookish Ways! ;-)

What especially caught my eye there was his very last remark:
"Also, I’m talking to Solaris about finally closing that gaping wound in my authorial psyche which is called the Sea Beggars. But we’ll have to see what happens with that one. There are lawyers involved…"

Even though this doesn't sound as if a solution is imminent it's good to know that this issue is at least looked at.
Hopefully, we'll see the complete set of the Sea Beggars in the not too remote future.

The SEA-BEGGARS situation is completely dependent on Bantam USA giving up the rights to the series, I understand. And that's not too likely as the books are still in print in the USA and still selling. If that's the case, Bantam should really be trying to publish the third novel as well, but that's not the case either. It's all very odd.

Yes, I remember that I learned about this situation in your informative blog post last August (http://thewertzone.blogspot.de/2013/08/update-on-paul-kearneys-sea-beggars.html).

Nevertheless, I'm pleased to read that Kearney is still trying to have a solution (someday).
It's really ridiculous. I hope that maybe someone at Bantam's -who is in the position to do so- will see how nonsensical the situation is and that this doesn't exactly shed a good light on the company.