Omar, Waj, Faisal and Barry are four Muslims living in Sheffield. Radicalised by the war on terror, they decide to martyr themselves for the cause by damaging the British state as much as possible (although Faisal favours training crows to carry explosives into buildings instead). Barry, a new convert to the religion, is furious when Omar ascends to lead the group and, along with the mentally-challenged Waj, is invited to Pakistan for training in an al-Qaeda camp. As Barry and Omar vie for leadership of the would-be terror cell, Omar faces another conflict with his pacifist brother. After the accidental detonation of some of their explosives (and a passing sheep) attracts the attention of the authorities, the cell rushes to London to carry out their plan... 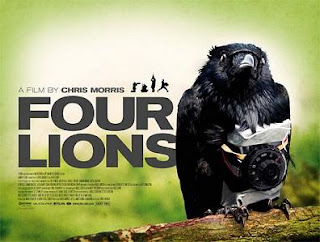 Chris Morris is well-known, even notorious, in the UK for his extremely confrontational and controversial brand of comedy. He first rose to attention fronting spoof news show The Day Today in 1994 (which also gave the world Steve Coogan's character of Alan Partridge) before moving onto the considerably harder-edged Brass Eye. He's been less prominent recently, focusing on co-writing the so-so Nathan Barley (with Charlie Brooker) and having a recurring guest spot on the first two seasons of The IT Crowd. Four Lions, which he co-wrote and directed, is his first full-length feature film.

The question the film poses is, is it possible to make suicide bombers funny? Predictably, the film attracted controversy in the UK before release, but afterwards seemed to win over most of the critics by knowing when to veer between comedy and tragedy, not to mention the complex characterisation of lead character Omar (an excellent performance by Riz Ahmed), a man who is prepared to die for Islam but angers his pacifist-but-old-school brother by treating his wife as a full equal and partner. The film characterises the would-be suicide bombers as a mix of fundamental radicals and crowd-followers who earnestly believe in their faith and their cause, but also benefit from their comparatively easy lives in the West (leading to the hardcore jihadists in Pakistan labelling the British visitors as 'Mr. Beans').

The culture clash is well-handled, particularly with Barry (Nigel Lindsay) who has something of an inferiority complex due to not being born a Muslim and urgently wants to stamp his authority on the group, but constantly failing due to his moronic ideas, lack of stealth (he was in the papers for sending a cake in the shape of the Twin Towers to a local synagogue on the anniversary of 9/11) and ludicrous sense of destiny ("If we don't do this, Islam is finished!"). 'Special' Waj (Kayvan Novak) and the easily-led Faisal (Adeel Akhtar) are more played for laughs, but the writers and actors are careful to give them more depth and turn them from figures of fun into gradually more tragic figures as the film continues (the culminating conclusion between Waj and Omar is brilliantly-played).

There are some genuine, jet-black, laughs in the course of the film (look out for the police snipers arguing over whether wookies and the Honey Monster are related to bears) as it builds to an inevitably bleak ending. This gradual shift in tone, which could have sunk the film if mishandled, is masterfully executed.

On the negative front, the film fails to address exactly why the four British Muslims are radicalised in the first place (aside from Barry's issues), a question that has been often asked here in the wake of the 7/7 London bombings in 2005. Perhaps Morris felt there was no easy answer to the question and so dodged around it, but it does leave Omar in particular bereft of a convincing motivation for his actions, especially given his liberal tendencies in other areas.

Four Lions (****) is a sometimes hilarious, sometimes tragic but always absorbing film that makes the viewer laugh and raises some challenging questions without offering pat answers. The movie is available now in the UK on DVD and Blu-Ray, with no US release listed as yet.
Posted by Adam Whitehead at 14:55

Thanks for the review, Wert. It's a film I've been interested in since I saw a teaser of it, but never gotten around to getting.

You've addressed the fears I had about it, and I'll probably get it when I can.

I quite enjoyed it but, as happens a lot these days, I felt they put too many of the jokes in the trailers. And yeah, it got quite depressing and disturbing towards the end which I guess was the point.