With Caprica continuing its disastrous ratings slide (the latest episode attracted a feeble 718,000 viewers), SyFy appears to be lining up a second Battlestar Galactica spin-off series. 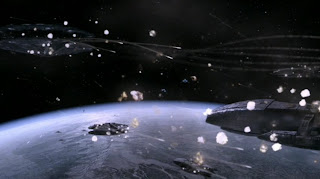 They have commissioned a pilot episode for a potential new series with the (hopefully working) title Battlestar Galactica: Blood and Chrome. The new series is set ten years into the First Cylon War, forty-two years before the events of BSG and sixteen after the beginning of Caprica. The main character will, once again, be William Adama, now a young pilot serving aboard the newly-commissioned battlestar Galactica.

The new series will recreate many of the sets from BSG (destroyed at the end of filming) digitally, using the high-resolution scans taken of the sets during the filming of the finale. Presumably this will mainly apply to the very large and elaborately expensive sets such as the hanger bay and (possibly) C&C.

The new series will take its cue from the Adama flashback scenes in the BSG TV movie Razor, but some retconning appears likely. In Razor we are told that Adama is flying his first combat mission as a Viper pilot (after previously flying Raptors) on the very last day of the war. The series will presumably feature him as a combat pilot much earlier than that. Nico Cortez, who played Adama in Razor, will apparently be considered for the role in the new series but recasting is also possible.

Michael Taylor, who wrote the pilot script, and BSG and Caprica helmer David Eick are executive-producing the new series, with BSG vets Bradley Thompson and David Weddle (responsible for many of BSG's finest episodes) also returning. BSG supremo Ronald D. Moore is developing other projects and is not officially attached to the project at this time. BSG composer Bear McCreary is also expected to return, although a deal hasn't been confirmed yet. As far as a timeline goes, the pilot will be filmed in early 2011, but may not air until 2012 if SyFy decide to press ahead with a full series.

Apparently Blood and Chrome's commissioning does not necessarily spell the end for Caprica, but with that series' ratings reaching embarrassingly low numbers, it seems unlikely that it will return. A decision on Caprica's future is expected by November 15th.
Posted by Adam Whitehead at 09:22

That was only mentioned in the webisodes. Neither the TV or DVD version of Razor included that comment. Thank God.


Mark Stern acts like this isn’t made to replace Caprica, but IMHO it’s pretty obvious that it is.

Why don't they make a honor Harrington series? I really think it's worth making.