Pat has posted the map that will be included in Ian Cameron Esslemont's Stonewielder, due out next month in the UK: 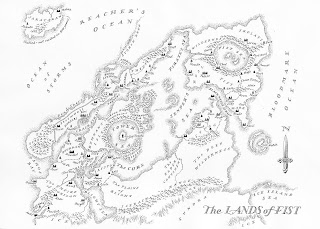 Copyright Neil Gower and Bantam Books 2010.
This map shows the northern coast of Korelri, the continent to the south-east of Malaz Island (here called 'Jakatakan', the old name for when the island's second city of Jakata was dominant) and Quon Tali. Korelri consists of two subcontinents, Korel (or Fist) in the north and Stratem in the south, separated by the vast Aurgatt Range and the Sea of Chimes. Korel itself was one solid landmass shattered into multiple islands and small landmasses by the fall of the Crippled God some 150,000 years before the events of the books. The Malazan Empire has been fighting to conquer the continent against the Korelri Compact for several decades, but has faced vigorous opposition. Due to the events described in the earlier Malazan books, the Empire has apparently taken its eye off Korelri and the Compact now appears to have the upper hand. How the war plays out is likely to be a focus for Stonewielder.

Other locations of note on the map: the Stormwall along the north-western coast is mentioned in several earlier books, most notably Night of Knives, The Bonehunters and Return of the Crimson Guard. The island-peninsular of Theft is the location of events in Blood Follows, although curiously the city of Lamentable Moll is not listed.

Intriguing stuff. Seeing a full world map of the Malazan world would be quite interesting, but apparently isn't on the cards for the near future (apparently there won't be one in Erikson's final novel in the core series, The Crippled God, due in February 2011).
Posted by Adam Whitehead at 15:41