Seattle, 1880. Sixteen years ago the inventor Levictus Blue built a machine to tunnel under the Klondike ice to help mine gold. Unfortunately, the 'Boneshaker' apparently malfunctioned and laid waste to parts of central Seattle, exposing vents of a strange volcanic gas which infested the city and turned the people it touched into the shambling undead. Now the centre of the city is sealed off whilst life returns to normal in the 'outskirts'. 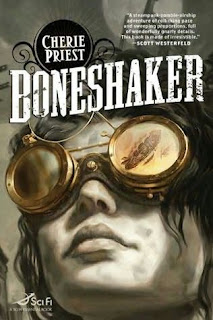 Levictus's son, Zeke, is determined to clear his father's name and ventures into the sealed off part of the city to unearth the truth behind the Boneshaker incident. His mother, Briar, pursues him and they find a city of crumbling buildings, tiny feudal empires, airships and pirates holding and hiding old secrets.

Boneshaker is the first book in The Clockwork Century, a loosely-connected sequence of alternate-history steampunk novels. It's successors are Clementine and Dreadnought, both already out in the USA. This is alt-history meets steampunk with a splash of the post-apocalypse to it (events in the sealed off area of the city do feel very much like a potential Fallout: Seattle computer game). Nominated for a slew of awards and winning several of them, Boneshaker is one of the higher-profile recent alt-history books to appear.

Generally speaking, Boneshaker is a decent but problematic novel. In terms of atmosphere and description, Priest is very successful at creating a deserted, crumbling city and its eccentric residents. In terms of pacing the book is more muddled, with a strong, relentless pace in the first half becoming sluggish and turgid in the latter. There's a little too much mucking around in the underground at the expense of characterisation, whilst the action sequences are confusing and not laid out well. The character-building is also a little lacking, with us spending far too little time with the principle antagonists to really get a grip on who they are and what makes them tick. With the protagonists, Briar comes off very well but Zeke is far too unintelligent and obtusely stupid to make for a sympathetic character. He may only be fifteen, but he is written more like a nine or ten-year-old, which becomes very annoying very quickly. The book is also marketed heavily to feature airships, but they do not play a very major role in events, and those looking for better and more significant airship action are advised to check out Chris Wooding's Tales of the Ketty Jay or Alastair Reynolds's Terminal World.

On the plus side, many of the secondary characters are more colourful, engaging and intriguing, such as the steamborg Lucy, Captain Cly and the splendidly-named Swakhammer. The story, although losing its way in the last part of the book, does recover to deliver a creepily effective finale (one which shows rather than tells, and does it well). Priest also provides a detailed postscript revealing what she changed for make alt-Seattle work and why she did it, which is interesting.

Overall, Boneshaker (***½) is a readable and entertaining novel, despite some issues with characterisation and pace, but is a little lacking compared to some of the other neo-steampunk novels around at the moment. The book is available now in the USA and on import in the UK.
Posted by Adam Whitehead at 11:28

I've been on the fence about this Cherie Priest series, should I read on not. Similar to your review, I've heard both good and bad about the books.

I'd like to give them a try, because I really am getting into this alt history thing lately, I'll see if the library has at least the first one.

Exactly. I got my money's worth from Boneshaker but all the award nominations left me absolutely baffled.

Nice review Wert. As a resident of Seattle, I've been particularly interested in this one for awhile. After reading your review, I might have to check it out.