Gregor Eisenhorn is an Inquisitor of the Ordo Xenos, charged with exposing and exterminating heretics, mutants and aliens who pose a threat to the Imperium. On the unwisely-colonised planet Hubris, where the population waits out immense periods of darkness in cryogenic suspension, Eisenhorn decisively concludes a six-year manhunt for the traitor Murdin Eyclone. But the elimination of Eyclone raises new questions and hints at fresh conspiracies. Eisenhorn and his retinue have to tackle rival factions in the Inquisition, followers of Chaos and inscrutable alien creatures as they follow the investigation to its bitter, and exceptionally violent, end. 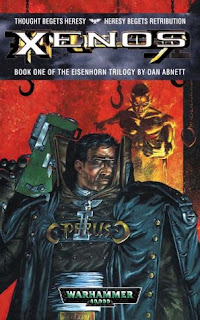 Thankfully not the present cover.
Xenos is the first book in Dan Abnett's Eisenhorn Trilogy. This trilogy is set in the Warhammer 40,000 universe but, as with many series in this setting, is self-contained. For example, the Sabbat Worlds Crusade that features in Abnett's Gaunt's Ghosts series is set many thousands of light-years away and over 500 years later in the setting's continuity. In fact, not just the immediate setting but also the subgenre is different: whilst Gaunt's Ghosts is a war series focusing on the lives and activities of soldiers, Eisenhorn is detective SF (I'm tempted to say more in the line of Richard Morgan's Kovacs books, but Eisenhorn predates Kovacs by over a year). It's a much smaller cast and a tighter focus, told in the first-person from Eisenhorn's POV. Whilst the POV structure initially appears limiting, Abnett cleverly employs it to give hints to the reader of things not being as they appear. Eisenhorn's blind confidence that he will always do the right thing is called into question by his actions, meaning that his actions and motivations have to be carefully scrutinised by the reader.

There are also some good SF concepts being explored in this book. From the complex day/night cycle on Hubris which the colonists are determined to overcome in the face of common sense to the dizzying 'tetrascapes' the alien saruthi employ as meeting places, there are some cool hard SF ideas being played with here. Abnett also continues to give good battle. Whilst large-scale war scenes are not the order of the day, there are some solid action sequences. Abnett also gives us our first look at the Space Marines in action in his work (the Space Marines play no role at all in Gaunt's Ghosts) when Eisenhorn has to team up with an Astartes of the Death Watch chapter to handle a particularly dangerous part of the mission.

This is an earlier novel for Abnett, so lacks some of the polish of his more recent work, but he handles the shift in tone and subgenre very well. Xenos (****) is a solid SF detective novel. It is available now in the Eisenhorn omnibus (UK, USA) along with its two sequels and two related short stories.
Posted by Adam Whitehead at 16:03

can anyone explain what / when the opening chapter is all about and who is accessing the datalogs in each books prologue???

don't look it up! you'll find out in the next book.