A classic, old-school 1980s computer game you may remember (if ancient and decrepit enough) is The Oregon Trail, in which you had to cross the North American continent, evading Indians, starvation and dysentery along the way. Now a zombie-themed remake has surfaced. 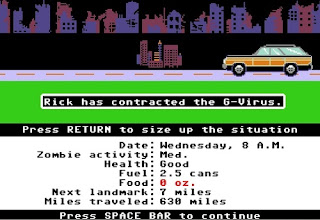 Named, inevitably, The Organ Trail, you start in Washington, D.C. with a clapped-out motor, five survivors and some time to spend scavenging for food, medical supplies, spare parts and bullets before the government nuke the zombie-infested city. Once you're read to go, you have to cross the continent (taking an insanely roundabout route around areas of high infestation and radioactive fall-out zones from where the military has nuked high undead concentrations) to Oregon, where a safehaven has been established around Portland. Along the way you can barter for supplies, buy food and fuel from enclaves or, when desperate, leap out and scavenge for food via a little mini-game where you have to shoot zombies and grab shopping carts.

The game's still in beta, so it's a little buggy, but overall it's an entertaining way of passing a couple of hours. Check it out at the link above. Hint: I overloaded on bullets, getting about a thousand, and had only used about 200 of them by the time I was overrun (about 5,000 miles into the journey, past Vegas after a roundabout route). Food and fuel are more important.
Posted by Adam Whitehead at 17:15

Made it all the way to Oregon.

Mind you, in true Homeric fashion i was the only survivor.