The Battlestar Galactica spin-off series Caprica has been cancelled. SyFy broke the news in the wake of disastrously low ratings for the show and a mixed critical reception after it returned from an inexplicable seven-month mid-season break (prior to which its ratings were a lot stronger). 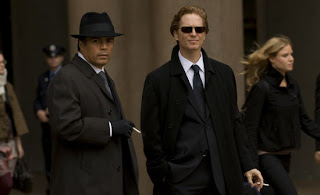 The news, coming in the wake of the commissioning of a second, more combat-oriented spin-off (with the working title Battlestar Galactica: Blood and Chrome), was not surprising. However, SyFy have taken the surprising additional step of not allowing Caprica to run its course, instead removing the show from the network after 2 November and airing the five remaining episodes 'some time in 2011'.
Posted by Adam Whitehead at 12:08

Sad news. I've not seen Caprica, personally, but I found the break odd.

Do you know what this means for the UK broadcast, Wert? We're only halfway through IIRC (Could be wrong). I'll still be picking up the S1P1 DVD that comes out in January, though.

Oh you've got to be fucking kidding me.

Sure, cancel it, I guess it didn't really work out in commercial terms, but pulling it when there are only the five more episodes to go? Unless they're doing this specifically to reframe them as the last episodes of Caprica ever - and let's not kid ourselves - there's no excuse for that kind of manhandling. None.

Kinda looks like they were trying their best to screw it up really! What a waste of a budget that could have gone on original SF or a novel adaptation.

Maybe SciFi will start to realize that putting a show on hiatus when its ratings are actually steady is a bad idea. I can't see how a show like Caprica, which had its slow moments, but ultimately was a good sf-drama, can get lower ratings that Sharktopus or whatever crap movie of the week they've produced gets.

Ever since they changed their name from Sci-Fi to SyFy, they've been a mess. The American television stations are a mess and always have been. FIREFLY was totally screwed by Fox, for example. But SyFy has, in trying to appeal to a "wider audience," has alienated a lot of their regulars.

This won't teach the suits in their high-rise NYC offices to keep their mitts off of a show. I suspect they actually do stuff like take these mid-season hiatus moves in order to murder a show that would otherwise have staying power.

Dammit, and it just starting airing in Australia for a few weeks now. :(

Here's hoping the new show proves to be more successful (albeit without the crappy title included).

I'm guessing that their holding those 5 episodes for the DVD release.

The series was just too slow moving and bleak to attract a large enough audience to succeed and I am surprised it lasted this long. I am however disappointed and angry that the remaining episodes aren't being shown now. This happens all the time where remaining episodes of a canceled show are aired much later or sometimes never shown. You'd think that the network having spent the money to produce these episodes would be anxious to get what they can out of them while there's still some audience left. Apparently not.