Inquisitor Gideon Ravenor and his team have evaded a lethal trap and returned incognito to Eustis Majoris. Aware that some of the planet's law-enforcement agencies are involved the flect trade, Ravenor invokes Special Condition status, going deep undercover and gaining the ability to deal with the crisis any way he sees fit. 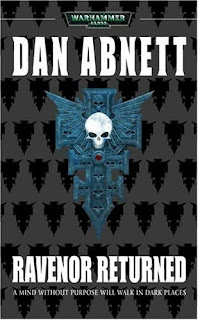 Ravenor Returned is the second novel in the Ravenor Trilogy and, unusually for an Abnett WH40K novel, does not stand alone, instead picking up almost immediately after the events of the previous book (the omnibus edition incorporates a short story where Ravenor is briefly reunited with Eisenhorn and receives a dire warning of events to come). Ravenor and his team are back on Eustis Majoris, able to operate only on their own with no official assistance, whilst their various adversaries are continuing to forward their own plans.

One of the more notable changes to Ravenor Returned from the previous novel is that there are two factions opposed to Ravenor with their own complex plans in motion and we get POV chapters in both camps, building up a much more complete picture of what is going on. This gives rise to some of Abnett's better-realised adversaries, such as Lucius Worna and Revoke, as their agendas also clash (rather amusingly, in one case) with one another as well as the Inquisition. But once again the main focus of character development is on Ravenor's team as they continue to face their own challenges and issues (some pretty major ones, in one case).

Complaints are few. Sholto Unwerth and his splendidly entertaining diction gets disappointingly little page-time, whilst Ravenor himself is a little bit of a blank slate compared to his very well-realised team-members and Eisenhorn.

But overall, Ravenor Returned (****½) is a very fine continuation of the series. It is available now as part of the Ravenor Omnibus in the UK and USA.
Posted by Adam Whitehead at 08:44