It is now looking very likely that A Dance with Dragons is going to be split for its (eventual) mass-market paperback publication in the UK. 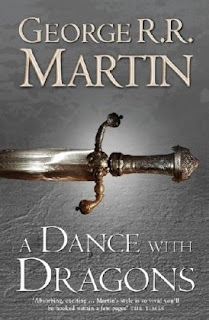 A previous commentator suggested that he'd heard from HarperCollins Voyager (who publish A Song of Ice and Fire in the UK) reps that this was the case, and I have been able to verify that this is the current likelihood.

A Dance with Dragons currently stands at 1,500 manuscript pages in length (well north of 400,000 words), just short of the 1,530 pages of A Storm of Swords. As previously reported, George R.R. Martin has five chapters left to complete and finalise, and these pages will take the book over ASoS's size. The good news is that, at the moment anyway, the American publishers seem able to publish the book in both hardcover and paperback in one volume with no problem at this size. Voyager are also planning to publish the book in one volume in hardcover and tradeback, but, like A Storm of Swords before it, it will have to be split for mass-market paperback. 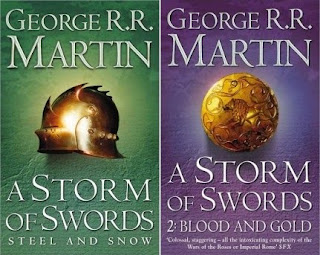 Take two Song of Ice and Fire books into the shower? Really? That's weird.
This news is likely to be of interest to those UK readers planning on holding off on purchasing the book until the paperback comes out for cost reasons, as two paperbacks (at £7.99 each) will be more expensive than a tradeback (£15) or possibly even the hardcover (£20, but likely heavily discounted on release).

Apparently (not from official sources) the printers that HarperCollins utilise refuse to publish such a large book in one volume and contractual obligations prevent them from going to a different printer (such as Bantam UK's who put Steven Erikson's 1,300-page paperbacks out with no problem, or Pan Macmillan's, who have no problem publishing Peter F. Hamilton's gigantic tomes). Whilst precedented by the split of A Storm of Swords in the UK, this news is likely to frustrate UK fans of the series further.

To reiterate, the American publication of the novel appears to be holding at one volume, and the British initial release will also be in one volume. This applies to the British mass-market paperback release only.

UPDATE
Forgot to mention this, but HarperCollins Voyager are also publishing a new edition of A Game of Thrones in the Spring to tie in with the TV series (as Bantam already are). The new edition is more than just a rejacketing as it will feature a whole new typeset. Those with the existing UK copies of Thrones will know that the book has a fairly thick, ink-heavy typeset when compared to the later books in the series. An extremely minor change, but one that is quite interesting anyway. The new edition will also be in the larger 'B'-class paperback.

Voyager are also doing a special release of the entire series in e-book format, hopefully before ADWD and the TV series appear.

I can't say I'm surprised, and I perhaps even expected it to happen.

Oddly, I kinda hope they will be split in the UK (As I wish Orbit would do with WoT) and sold for a lower price as some of us find larger tomes quite off putting, and it's more convenient if you read on the bus/train as you're not carrying a ridiculously huge tome around.

Time to buy that e-book reader methinks. Like many I'll be itching to get hold of this the nano-second it's released. I'll buy the hardback for my bookshelves, for the sheer joy of possessing it, but to keep it pristine and for reading convenience I'll go the e-book route, and probably Kindle rather than iPad.

I have one word to summarize my reaction to this news: FUCK!!!

Maybe, (please please please) if GRRM decides to push some further material into The Winds of Winter, we will have a chance of getting ADwD in one piece as a paperback?

I mean, A Storm of Swords has a special place in the series. It's a monster of a book. It stands on its own in terms of length. But Dance is the "second half" of Feast to begin with! The way they were split was really clever and cool, but now fragmenting it even further, even for length reasons, is just so... wrong. Maybe George could just move the leftover characters from Feast into the next book where they'll show up anyway? Otherwise the geographical split won't make much sense in retrospect anyway...

Based on what happened to Robin Hobb's book (cut in half at somewhere around 300-350,000 words), a substantially large chunk of ADWD - maybe a fifth of the book - would have to be cut out to reduce it in size to the point where Voyager are prepared to publish it in one volume.

One of the (few) redeeming features about the wait is that Martin is addressing the AFFC storylines and moving them on in ADWD without having to push them back to Book 6 (and another multi-year wait for that), so it'd not be advisable to cut out those elements. It would also disrupt the timeline of the book.

However, Amazon UK will likely import some copies of the US one-volume paperback edition. The only drawback with that is that with the two previous books, the Americans took two years to bring out the paperback after the hardcover came out, so that might not appeal either.

It's not about the cost or the wait, it's about reading the book without switching volumes. Or cover-art.

Hey, I feel annoyed too! If enough fans feel the same way, maybe there's like a petition we could do or something? To persuade Harper Voyager or whoever makes those decisions? What do you guys think?

I'll more than likely buy the trade the moment I get a release date, but this really does suck.

When did GRRM say he had five chapters left to finalise? I don't remember reading about it.

"When did GRRM say he had five chapters left to finalise? I don't remember reading about it."

A few entries back, he told his publishers he had five chapters left to finish off, which has since been reiterated by both his UK and US publishers.

And the series is still supposed to be seven books, right? Seems kinda unlikely now...

I wonder if we will have THE WINDS OF WINTER split into three volumes in the UK paperback edition or something...

Where did you get the info about an e-book release for Ice and Fire? What's the source for that? I'm wondering whether there will be a UK release of these as e-books - they aren't currently available in the Kindle store (or anywhere else), even though they used to be available a few months ago.

I heard about the ebook editions from two Voyager editors directly.

Plus the new Kindle version of AGoT should now be live: