In Richard Morgan's Altered Carbon, he envisages a future in the 26th Century where sentient hotels protect their customer's interests with, if necessary, ceiling-mounted retractable miniguns (sadly not available at Premier Inn). Life being stranger than fiction, however, it turns out that Morgan was aiming rather low. A real-life hotel in Las Vegas is, right now, equipped with its own lethal laser beam. 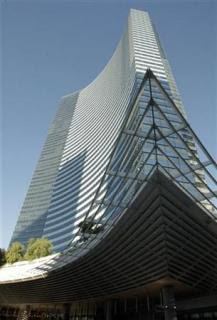 "Now witness the firepower of this fully armed and operational luxury hotel and spa!"
Customers at the Vdara Hotel in Las Vegas first noticed something amiss when, whilst lounging next to the pool, they noticed various items around them melting (pool furniture, the pool, their skin, their hair). It turns out that the building's ultra-reflective surface is a little too successful in refracting light away from the building. Spokesmen for the hotel denied they had inadvertently created a 'death ray', referring to the problem as a 'solar convergence phenomenon'. Puzzlingly, they suggested they could solve the problem just by planting some trees (presumably ones immune to heat).

Rumours that the light can be refracted onto rival hotels, the planet Alderaan or orbiting Zentraedi battle fleets cannot be substantiated at this time.
Posted by Adam Whitehead at 20:06

Lolz! Are you stepping away from your dry humor Wert? This seems a little animated for you.