The Witchwood Crown by Tad Williams

Thirty years have passed since the Storm King's War. Simon and Miriamele have ruled Osten Ard well, keeping the peace between the nations that make up the High Ward and the noble families within them, but their life has been tinged by the tragic death of their son. Their grandson Morgan stands to inherit the throne, but he is a wastrel more interested in drinking and wenching than in learning what he needs to rule. The heroes of the old war are passing and a new generation is coming to power, one that is less impressed by stories of old conflicts that they only half believe. 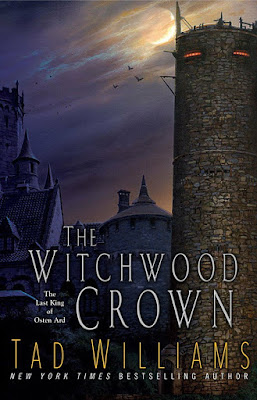 But in the far north, Stormspike is stirring. The Norn Queen has awoken after a long sleep and the lust for vengeance against humanity is resurgent. A band of Norn and half-Norn warriors strikes out on a quest they only barely understand. In the far south the kingdom of Nabban is on the brink of civil war. The Sithi have gone silent, their last messenger shot with arrows within sight of the Hayholt. The long peace is coming to an end, and the fate of the world again hangs in the balance.

The Witchwood Crown is the first novel in the Last King of Osten Ard trilogy, which sees Tad Williams return to the setting of his classic original trilogy Memory, Sorrow and Thorn (The Dragonbone Chair, Stone of Farewell and To Green Angel Tower) and the short novel The Heart of What Was Lost, published earlier this year. It's been twenty-three years since Williams last wrote in this world, the author wary of "franchising" his earliest and most iconic work until he had a story that was worth telling.

There is much to admire about The Witchwood Crown. Williams is telling a very large story from a large number of points of view. The original trilogy was very focused in the Hayholt and told a more linear, focused narrative which only gradually expanded outwards. This novel starts with a more George R.R. Martin-esque approach of having a larger cast in disparate parts of the world. One second we are with a slave living in the depths of Stormspike and then we're a thousand miles or more away in the palaces of Nabban, riven with Byzantine plotting. Old favourite characters return, including Simon, Miariamele, Tiamak, Eolair and Binabik, but there's a lot of new characters such as Morgan, as well as the return of characters like Porto from The Heart of What Was Lost. The worldbuilding is more in-depth, with reflections on time passing (Erchester is now a real city rather than the more modest town of the previous trilogy). Epic fantasy, as a genre, is at its best when it can indulge in "long-breathed storytelling" and The Witchwood Crown certainly does that. This is a marathon, not a sprint, and Williams develops his story with surety, confidence and time.

This does mean that The Witchwood Crown is a slow-paced work. Major plot revelations are separated by many chapters in which apparently little happens (although it does, it's just a lot more subtle). Although Williams tries very hard to make this book approachable for new readers, there's some instances of self-indulgence as Simon catches up with Binabik and asks about his family and his wolf, but this is generally kept to a minimum. The reason this book is so large (700 pages in hardcover) and so deliberately paced is because he is setting up a very big story and it's only towards the end of the novel that he fires the starting pistols which really get the narrative fired up.

This slow pace could be a bigger problem - and it's certainly put some other reviewers off - if Williams didn't also take his time to explore thematic ideas of ageing, grief and the passing of the years. Simon and Miriamele are now grandparents in their early fifties and apparently slightly baffled that so much time has passed so quickly. Those of us who read the original books when they first came out or shortly afterwards can sympathise: I finished reading the first trilogy on a fine summer afternoon in the park behind my old house almost exactly twenty years before I started reading this book, and a similar shock at the passage of time went through me. The characters are also haunted by the memory of the death of their son, John, and how this has impacted not just them but his son Morgan. Ironically, the joint grief they share has also divided them, with the natural lack of understanding between the generations preventing them from reaching an understanding.

This thematic idea gives the book a somewhat melancholy aspect. We also learn a lot more about the Norns and even sympathise with them (or at least some of them): they are a slowly dying race and their constant search for blood and vengeance seems pointless, corrupting further what was once a noble people. When they gain access to a new supernatural weapon, the reaction from some of the Norns isn't triumphant but instead weariness at the idea of yet another war, yet more pointless slaughter. The Witchwood Crown, on this level, is an epic fantasy that rejects some of the martial triumphalism and blood-letting that other epic fantasies revel in.

At the end of the book, some long-standing questions are raised, some long-missing characters return and other characters are left on immense cliffhangers, their fates unclear. Fortunately, we will not have to wait to learn more: the second novel in the trilogy, Empire of Grass, is already complete and should be published in late 2018 or early 2019.

The Witchwood Crown (****) is slowly, deliberately-paced and sometimes meanders or is allowed to become self-indulgent rather than being tightened up. It's certainly a slower novel than even the original Dragonbone Chair, and Tad Williams newcomers may be put off. But it's also wonderfully well-written and explores ideas of ageing, dying and living which are universal. For the most part the new storylines are logically extrapolated from the original trilogy without lazily rehashing it and confirms that yes, the return to Osten Ard is (so far) worth it. The book is available now in the UK and USA.
Posted by Adam Whitehead at 19:33

This is not at all the Osten Ard sequel I would have imagined, but in the long run it will probably be better.

Hey wert any plan on reviewing Heart of What Was Lost? unless i'm blind i didn't see one