The Trouble with Peace by Joe Abercrombie

A devastating rebellion has been crushed, a young and energetic new generation is rising to prominence and the Union has made an ally of its most dangerous enemy in the North. But peace does not bring prosperity, instead allowing simmering discontent to start fanning itself into a blaze. Former enemies find a common cause to unite against, allies are divided by ideals, complacent rulers find their positions uncertain and whispered complaints turn into the massing of armies on the move. The trouble with peace is that it never lasts. 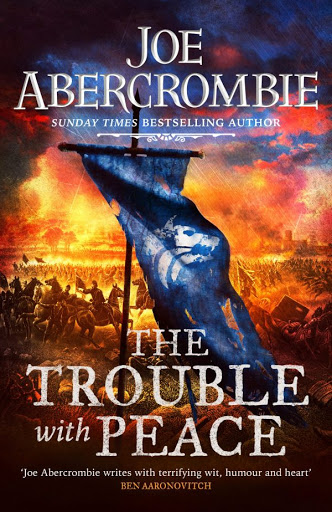 Trilogies can be a tricky structure to pull off. All too often they consist of a great opening volume and a solid conclusion, but where the middle book exists mainly to pad out the wordcount. In the case of The Age of Madness, the second trilogy set in Joe Abercrombie's First Law world, the work justifies the length. A Little Hatred set up the characters and reintroduced us to the world some thirty years on from the events of the original trilogy and three stand-alone follow-ups, and focused on a series of somewhat self-contained storylines to introduce us to the new core cast of characters. It did its job splendidly.

The Trouble with Peace builds on those foundations with a surprisingly epic novel. If A Little Hatred was a bit more small-scale than what we are used to from Abercrombie, focusing mainly on politics in Adua, civil discontent in Valbeck and yet more violence in the North (well-handled, but it feels like that plot well has been visited quite a few times already), The Trouble with Peace expands the scope considerably. In just under 500 pages, Abercrombie delivers us a tense election in Westport, political machinations in Styria, fuming discontent over refugees in Midderland, yet more political chaos in Adua, a quest by a brave band of Northmen (and two women) to find a sorceress, more economic and technological advancements in the Union crushing the little people underfoot, and whispered conspiracies in dark corners that eventually lead to a huge conflagration. A Little Hatred was the prelude to a much bigger story, which not only begins in The Trouble with Peace but feels like it climaxes, with a surprising amount of closure before the last chapter blows open the story again for the grand conclusion.

The result is one of Abercrombie's strongest novels to date, a story of politics and war and the individuals swept up in events. One of the most remarkable things about it is that it opens a yawning chasm between the characters who were (more or less) on the same side of things in the first volume. Characters choose sides for logical reasons and the reader's sympathies may be tested because it's hard to say who is in the right and who is in the wrong. Those who want to overthrow the old order because it is bloated and corrupt and backed by Bayaz, whom we know through seven previous novels is not a particularly trustworthy guy, have some excellent points, but those who want a continuation of peace, not sticking swords through people and undertaking more gradual reforms also have a point (and Bayaz may be a ruthless and untrustworthy git, but he also did kind of save the Union from a far greater evil in the original trilogy, from a certain point of view), and seeing the two sides come to blows is decidedly painful.

As the novel unfolds there are traditional shocks and surprises, abrupt reversals of fortune, dramatic falls from grace and sudden elevations to grace. There's also moments of friendship and mercy, but moments when even sensible and solid characters fall prey to bigotry and are easily manipulated by outside forces. There's also moments when those blessed with intelligence and cunning find themselves laid low by their own overconfidence.

There's also a feeling of topicality swirling through the novel. Abercrombie started planning this trilogy way back before he even finished the stand-alone successors to The First Law in 2012, so the underlying plot presumably was not based on contemporary politics, but it's hard not to consider the topicality of a city's referendum on the wisdom of leaving the Union, or the simmering and unreasoning rage being stoked in a rich and prosperous kingdom by an influx of immigrants contributing to that prosperity but who have the temerity to have differently-coloured skin. This is also firmly inspired by more distant historical events of course - the Industrial Revolution and the protest movements it sparked, like the Redressers and the Luddites - but watching contemporary events being reflected in a work of epic fantasy (not normally the most politically sophisticated genre of fiction) is unusual and refreshing.

The Trouble with Peace (*****) is Abercrombie delivering what he usually does - a story packed with memorable characters, action and dark humour - but with also more attention to worldbuilding and pace. A lot happens in a constrained page count (by the standards of the genre) and the pages fly by. There's also an increasing, Pratchett-esque attention to fantasy's oft-unfulfilled potential to reflect the world we live in, making for a smarter and more intelligent book. The novel will be released on 15 September in the UK and USA.

Email ThisBlogThis!Share to TwitterShare to FacebookShare to Pinterest
Labels: a little hatred, gollancz, joe abercrombie, the age of madness, the first law, the trouble with peace