The Crystal Shard by R.A. Salvatore

Far beyond the Spine of the World mountains, the ten towns of Icewind Dale stand in danger from an army of invading tribesmen. The outcast dark elf Drizzt Do'Urden learns of the impending threat and through his allies, the halfling Regis and the dwarven chieftain Bruenor, helps save the community from destruction. But in the aftermath of the conflict a betrayed mage finds an ancient artifact of incredible power, through which he means to conquer Icewind Dale. 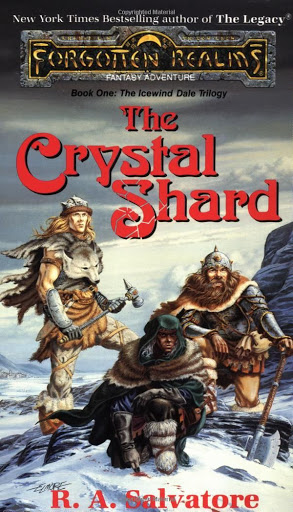 Published way back in 1988, The Crystal Shard was the debut novel by R.A. Salvatore, the first novel in The Icewind Dale Trilogy (a trilogy notable for two-thirds of it taking place outside Icewind Dale) and the first in the much longer Legend of Drizzt mega-series, which now encompasses thirty-six books (thirty-nine if you count associated spin-off volumes focusing on other characters). It was also only the second novel published in the Forgotten Realms setting, the most popular fantasy shared-world setting in history, and a key reason why that setting exploded in popularity in the following months and years. It is also one of the biggest-selling and most popular Dungeons & Dragons spinoff novels of all time, possibly the biggest-selling (although it shares mighty competition from Dragons of Autumn Twilight).
As the ship that launched a thousand sub-series, it's a curiously unassuming book. The stakes are relatively low - the fate of the world is not in the balance, just a backwater wilderness way beyond the northern edge of most maps - and there's a distinctly old-fashioned feel to the book. There's a fair bit of exposition and characters are prone to making declarative statements that end in exclamation marks! Not every line, but enough to feel like you reading a book where everyone is slightly deaf and has to shout to make themselves heard. The absolute near-absence of female characters in the otherwise extremely egalitarian Forgotten Realms (only one, Catti-brie, has any lines of dialogue) is also baffling, and was somewhat odd at the time, let alone today. It's something Salvatore does fix in later books (where Catti-brie becomes a major player and more female characters appear) but I had forgotten how hugely imbalanced this first book is.
If you can overlook that, although the novel is very much not High Art, it is definitely fun. It's riper than three-year-old Stilton, but Salvatore makes up for a lack of technical skill with unbridled enthusiasm. There's fast and frenetic action scenes, and the characters may adhere to broad archetypes but they are executed well. Drizzt lacks his later mopiness at this stage and is even allowed to have some character flaws (his weakness for treasure and finding valuable magical items is something rolled back later on, but is amusing here). Indolent and morally suspect Regis gives us an answer to that question of what would have happened if one of the dodgier Sackville-Bagginses had joined the Fellowship of the Ring, and Bruenor is the most dwarfish dwarf who ever dwarfed. The only one of the core cast it's hard not to entirely like at this stage is Honourable Barbarian Warrior Wulfgar, Who Is Honourable And Stuff. Wulfgar is the kind of guy who has his own special rock where he goes to sit and be stoically honourable on (to the unbridled amusement of Catti-brie, who seems to have some kind of metatextual awareness of Wulfgar's character and needles him mercilessly about it, in one of the more modern-feeling touches to the novel). It's unsurprising that Salvatore seems to tire of Wulfgar - originally supposedly the hero and main protagonist - quite quickly and instead refocuses on the quirkier characters like Drizzt and Regis.
The book also has a splendid feel for the wider community of characters. In books like this it would be very easy to have our core foursome (Drizzt, Regis, Bruenor and Wulfgar) undertake valiant deeds that save Ten-Towns from oblivion, with the people they are saving reduced to faceless background roles. Instead, the people of the towns are depicted as fierce and independently-minded, always eager to mix it up with the various invaders and with their own internal politics that are well-described, and even bit-characters are given some complexity. Kemp, the spokesman for Targos, is both a selfish political game-player and a brave warrior eager to get to grips with the enemy. Surprisingly, Salvatore makes you care slightly more about these people more than you would for the otherwise amorphous blobs of "people we must save" in such stories.
The characterisation of the villain is also quite interesting: Akar Kessel, the mage who finds the Crystal Shard, is a complete and total imbecile and the semi-sentient Shard has to do a lot of work to mould him into a credible threat to Ten-Towns, to the point of often despairing at his total ineptitude. This is sometimes played for laughs, although darker character traits are hinted at: the fate of various "wenches" that Kessel mind-wipes into becoming his playthings - in another outbreak of 1980sness in the text - is mercifully left unaddressed. Kessel's ultimate fate is also darkly amusing.
The Crystal Shard (***½) - the literary equivalent of a Greggs Festive Bake - has not aged as well as might be hoped, but it's still a cracking adventure yarn which is well-paced, entertaining and occasionally surprising, if you can get through the wincing generated by some of the book's more dated aspects. Salvatore shows more enthusiasm than skill here, but does improve as a writer over the next few volumes. The book is available now in the UK and USA.
Posted by Adam Whitehead at 13:51

It's pulp trash but it's such good pulp trash. The shard is a really nice concept well executed. Much better than the original artifacts in the DM guide. And it was great to see characters fight powerful dragons and demons and win back when there weren't yet 500 other D&D books just like this. But it has the failing that I think D&D in general has. It's all just an excuse to put a party together, fight monsters, and explore dungeons. No society could function with bands of 'adventurers' killing and looting at will or would have hoards of gold and magic under every hill. I've looked for decades for fiction that bridges this gap and puts a party adventuring for a legitimate purpose in a believable world, but nothing really scratches that itch. A decent example would be the Bridge Burners in Malazan, but that is more military fiction than fantasy adventuring.

No one knows what a Greggs Festive Bake is Englishman!