Ten years ago the alien Chasheen arrived on Earth. They are members of an interstellar commonwealth known as the Harmony of Worlds, 314 species living and trading together in the interests of galactic peace. They offered humanity the chance to become the 315th member and humanity accepted. Three great starports have been built to link Earth to these other worlds, the latest of which is located in Chicago. Charlie Baker, newly promoted to detective on the squad overseeing the Starport district, is keen to use his knowledge of alien worlds and civilisations to help on the job, but discovers that not all of his fellow officers - or civilians - are that keen on the alien presence. 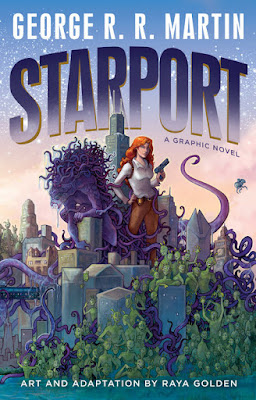 From roughly 1985 to early 1993, George R.R. Martin worked in Hollywood in the film and TV industry. He worked on The Twilight Zone and Beauty and the Beast, rising to become a producer on the latter. This earned him enough credits to try creating his own show, so he wrote a slew of pilots. Doorways was the only one that was filmed, and that never made it to series or the air. Another, written in 1992/93 shortly before he gave up on Hollywood to return home to resume work on an epic fantasy side-project called A Game of Thrones, was called Starport. It did the rounds of the four American TV networks before being turned down for being (as per usual with GRRM) too long and too expensive.

A quarter of a century later, Starport has been given a new lease of life as a graphic novel, adapted from Martin's original 90-minute script by Raya Golden. Golden previously adapted Martin's story Meathouse Man as a graphic novel to some acclaim, and Starport is an altogether larger and more impressive project.

As a graphic novel, it's an attractive package. The art is vivid, colourful and pops at the reader. The script is punchy and pacy, with the pages flipping by quite quickly despite the book's impressive length (almost 300 pages). Golden's artwork is excellent, mixing a classic comic book feel with modern colouring techniques and some crazy panels of technicolor alien vistas and species that feels out of a mid-1970s Marvel cosmic epic.

The script has been updated, with VHS jokes going out and smartphones coming in. The dialogue is mostly decent and well-done, although Martin's script hews towards TV standards of the 1990s a bit too closely at times (with more short, soundbitey quips and less of the longer, more erudite speeches that may be associated with his fantasy work, although this does keep the pace flowing). There's also the feeling of some references being updated but others not: so the internet is mentioned but the cultural touchpoints are Gilligan's Island and Kojak, which do feel a bit dated.

The protagonists are a likeable bunch, a mixture of beat cops looking to improve themselves, cynical lifers just trying to reach their pension, geeks fascinated by aliens, bigots who hate them and so on. The characters tend towards archetypes, like the undercover cop who gets in a bit too deep and justifies some dubious behaviour (like sleeping with much younger women) by saying it is to maintain his cover, but do have some depth thanks to the graphic novel's length. The adaptation is generous at almost 300 pages (to cover what was originally a 90-minute TV script) which allows it to delve deep into the characters and premise. There's a few characters who don't have a lot to do, which is where the "TV pilot" feel comes in a bit more (characters set up for bigger things further down the line), but it also helps the story feel more realistically populated.

It's easy to see why Starport never got made in the early 1990s. It has an epic scale and scope which I think would have been hard to translate to the screen. It also came along not long after the Alien Nation movie (1988) and TV spin-off (1989-90) which was abruptly cancelled. Although Starport's premise is rather different - a police force of humans working alongside alien security forces from the titular starport, rather than alien refugees joining the police force - the surface similarity may have put some producers off. The premise also feels a little bit like the later Babylon 5, with the starport serving as a meeting and mixing ground for hundreds of alien races and humans.

Starport (****) is brash, enjoyable and fantastically-illustrated. Those looking for a deep, immersive, serious story like A Song of Ice and Fire may feel disappointed, but those looking for a fun, pulpy SF yarn will be well-catered for. The book is available now in the UK and USA.
Posted by Adam Whitehead at 12:55

Is is a complete story? I'm wary of buying it because it's the first episode of a series that doesn't exist. (Although the book is sitting in the Amazon cart right now.)

Yes, it's a complete story. As a TV pilot script, it does end with the possibility of there being future adventures, but the story is concluded.

Thanks! I just ordered it. (From the link, if that helps.)