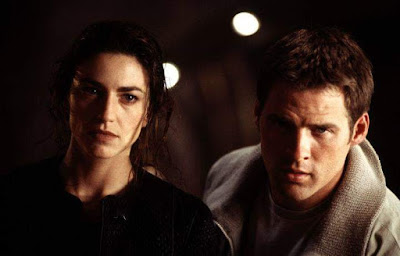 Launching on 19 March 1999 as a US-Australian co-production, Farscape ran for 88 regular episodes and two two-hour specials, concluding in October 2004. The show focuses on John Crichton, an American astronaut who is accidentally transported across the galaxy by a wormhole. He is found by the crew of a living ship called Moya, a collection of misfits and renegades where he feels at home. Vague attempts to return home are complicated by his growing camaraderie with his newfound friends and his own mental health (Crichton develops PTSD-like symptoms as a result of his misadventures).

As the story progresses, it becomes more serialised and epic, culminating with the team becoming central in a massive interstellar war between two major powers.

The show was notable at the time for its use of serialised storytelling, a device it had inherited from Babylon 5 and Star Trek: Deep Space Nine, but was also a lot more humorous. Although certainly not a comedy (unlike its absurdist Canadian contemporary, Lexx), it was a show that knew when to kick back and have fun as well as when to ramp up the dramatic tension. After a lukewarm first season, the show won immense critical acclaim in later years for its storytelling, effects, acting and the exceptional prosthetic makeup and puppetry.

All four seasons of Farscape and the concluding Peacekeeper Wars mini-series (listed at the end of Season 4) can be found now on Amazon Prime Video in most territories.
Posted by Adam Whitehead at 10:48

The finale of season 3 in particular (and its immediate run-up) is maybe the best thing ever in a SF show on TV (and one plotline that season in particular is genuine provocative SF, not just adventure-in-space). And the episode where they were all characters in a loony tunes cartoon was groundbreaking...

I think what Farscape should probably be remembered for is its darkness. The characters are likeable and admirable enough to empathise with - but they're all fundamentally dangerous people with major character flaws, thrown together by chance and frequently not sharing the same objectives or values. They're forced to make hard choices, and they're all pretty much on the verge of mental breakdown (and sometimes over the verge). It's not done in an afterschool special way, "today a special episode about mental health", but as you watch you realise that the episodes of plot-driven irrationality are just the punctuation to a long background of everybody being seriously frelled up the whole time - and everybody changing as a result of their experiences. And by producing a handful of the weirdest episodes of anything ever, it does its best to share that madness with its audience... Farscape is often mentioned for its weirdness (both generally and in its occasional 'mindfrells') but it's the undercurrent of desparation that gives that weirdness its edge.

Unfortunately, for all its great moments, it also had a lot of really quite bad episodes, and even some of the good episodes are maimed by terrible guest stars.


If you're not pulled in by the first season, don't be surprised. I think the pilot's pretty good, but after that there's quite a lot of quite variable-in-quality stuff, particularly not helped by sometimes being shown out of order.

Frankly, after the pilot, and maybe e3 (Exodus from Genesis), I'd skip to e7 (PK Tech Girl) (I don't like 7 or 8 much, but they do have important developments; e9 (DNA Mad Scientist) is the point where a lot of people realise that this isn't star trek, and either love it or hate it from there on), watch from there to e11 (Till the Blood Runs Clear), and then ski forward and watch from 15 (Durka Returns) through to the end of S1. A Human Reaction is particularly excellent, with the exception of the worst effects in the series in the last few minutes...


If nothing else, Farscape is worth watching just to see how great an influence it had over later, more sanitised Farscape-clones like Firefly and Guardians of the Galaxy (or the sadly cancelled Dark Matter).

Actually, one other thing I'd add: despite having zero budget (or sometimes because of it) it's a show with a remarkable look. In a way, with its puppets and weird set-dressing, it's so alien that it doesn't really age (occasional CGI moment excepted), and both its direction and its cinematography are really excellet. This isn't just drab, function Star Trek stuff, this is (sometimes) attention-grabbing framing.

There are so many moments that would make great stills...