News from a few weeks ago suggests that the TV series based on Terry Pratchett's City Watch Discworld novels has been greenlit to go into active production. A formal announcement doesn't seem to have been made, but attendees at the official Discworld Convention in Birmingham in late August seemed to be talking about the project as a done deal. 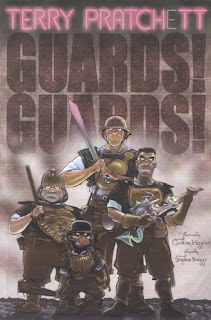 The proposed project would be an ongoing series with a first season of 13 episodes, unlike the existing Discworld TV adaptations (Hogfather, The Colour of Magic, Going Postal and the forthcoming Unseen Academicals) which are two-part TV movies. The series has the current working title The Watch. The series will be produced by Pratchett's own production company, Narritiva, in association with BBC Enterprises. The only announced writer so far is Guy Burt, who has worked on The Borgias and The Bletchley Circle. The series will comprise adaptations of the existing City Watch novels (presumably starting with the first, Guards! Guards!) and all-new adventures.

Narritivia is also developing a four-part TV mini-series based on Terry Pratchett's immensely popular collaboration with Neil Gaiman, Good Omens. This project will be co-written by Monty Python's Terry Jones and the somewhat-less-reputable Gavin Scott (whose credits include the rather poor TV adaptations of The Mists of Avalon and A Wizard of Earthsea).
Posted by Adam Whitehead at 22:27

any word on if this is still happening or not?