The city of Dunwall and its surrounding territories are ruled by the Empress Kaldwin, a fair and strong ruler. When she is assassinated and her daughter Emily kidnapped, her bodyguard Corvo Attano is held responsible and imprisoned. After six months, a brutal new regime under the Lord Regent has been established and the city placed in a state of fear. When Corvo is rescued by loyalists to the old regime, he is given the tools to carry out a series of missions aimed at removing the Lord Regent, rescuing Princess Emily and restoring justice to Dunwall. But a virulent plague and uncertain loyalties amongst the various factions make Corvo's job a lot harder as he must decide to take the path of blood-soaked vengeance or striking surgically from the shadows. 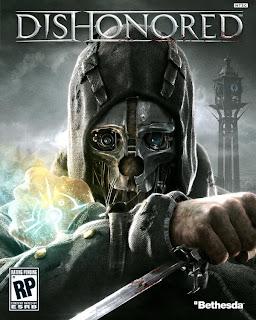 Dishonored is a first-person action game developed by Arkane Studios, with several of the developers of the Thief, Deus Ex and Half-Life franchises working on it. It is a richly atmospheric game which, refreshingly, rewards you for avoiding violence, chaos and killing (though still allowing you to pursue that course if you really want to).

The game places you in the role of Corvo, a bodyguard-turned-secret agent. You have a variety of tools at your disposal to carry out missions, including magical powers (the ability to blink - teleport short distances - is essential) and equipment including crossbows with sleep darts to knock out foes. You can also knock out unsuspecting enemies with sneak attacks and, if really necessary, use firearms and swords for direct combat. You can also use your magical powers to possess other creatures (including human characters) for brief periods. Each mission is set in a substantial area of the city of Dunwall, with you able to scale buildings using your powers and hide in the shadows from unsuspecting guards, or try a frontal assault option and wade through rivers of blood on your way to your objective. However, using violence and killing people increases the amount of chaos present in the city, which affects the number of guards (and rats) on later levels, and their alertness.

Dishonored's biggest success is its setting, with Dunwall being a grimy industrial city with a tech level more like Victorian England than a traditional high fantasy location. There are echoes of steampunk and China Mieville's world of Bas-Lag in the setting, which is a fascinating place to explore. There are also numerous books, posters, notes and audio logs dotted around the city which unveil its history in some depth and add to a feeling of immersion in the game. The depiction of grimy tenement blocks, rich manor houses and immense official structures (such as prisons, fortresses and fortified lighthouses) is remarkable, giving the game a tremendous sense of place. These settings also reward exploration, with Corvo often able to find bonus items and cash by thoroughly exploring every area rather than blitzing straight through.

The game's freedom has been its main talking point, with players having multiple paths to victory. This is true to a large degree, although there are still only a finite number of ways to proceed. The game is open enough to allow for two or three playthroughs using different styles (to unlock the several different endings), although arguably the game's freedom is not sufficient to justify more than that. With no multiplayer, the game's long-term replayability may be in doubt, though the (often difficult-to-achieve) achievements do help with that issue.

The writing and the characterisation in the game is fairly solid, and there's much amusement to be gained by eavesdropping on conversations from the shadows or spying through keyholes (sometimes learning something valuable that opens up new ideas and objectives). The game gives out an achievement for 'ghosting', which is not only getting through the game without killing anyone but getting through the game without anyone being aware you were even present. Achieving this is highly satisfying. The game also allows you to complete it without ever having to kill anyone, even assassination targets, which is an improvement over the recent Deus Ex: Human Revolution, which was impossible to complete without killing at least three mid-game bosses.

The game is well-paced, with missions taking anything up to three hours apiece to carry out if you are thoughtful and methodical. There have been complaints by some players about the game being too short, although to complete the game in much less than eight hours or so is only possible if you take the frontal assault option, which seems to be missing some of the point of the game. For my first playthrough I took a non-lethal course, methodically exploring each mission to start with and then picking up the pace in the later missions (where there is a much greater sense of urgency to events). This led me to completing the game in just under twelve hours, a very satisfactory amount of game for my money (and also leaving several other endings and playstyles available to be explored).

Dishonored (****½) is an intelligent and atmospheric game which gives the player a lot of freedom in how they choose to approach it and what they want to get out of the game. Surveying a target from a rooftop, coming up with a plan to get in without being seen and executing that plan successfully is great fun; when the plan goes awry and having to come up with a new idea on the fly even moreso. The game does falter a little towards the end, with a sequence set in a flooded part of the city going on a bit too long and the player being railroaded into the nearest thing the game has to a boss fight, but overall this is a rich and compelling game experience.

Thanks, Adam. I'm not very adept at first person action games, although I do play them on occasion. Sounds like this one is a winner.