Schwarznegger to return as Conan?

Universal Pictures, Paradox Entertainment and Arnold Schwarznegger have done a deal which opens the way for a new Conan the Barbarian movie starring the ex-Governator. 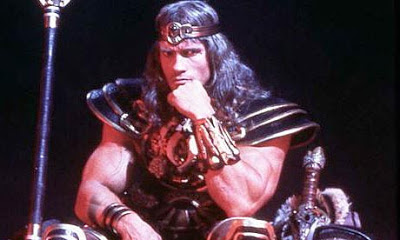 The new movie will ignore both the recent Jason Momoa film and the 1984 Conan the Destroyer (starring Schwarznegger) and will instead work as a successor to the original 1982 Conan the Barbarian, the movie which began Schwarznegger's ascent to superstardom. The new film will depict Conan in the closing stages of his life, as an old king and warlord ready for one last glorious adventure before the end. This story idea tracks with Robert E. Howard's original stories, which depict Conan in his old age as King of Aquilonia.

The producers of the project cite Unforgiven as their inspiration for the tone and direction of the picture, which they hope will be darker and more philosophical like the original movie. It remains to be seen if the picture will be formally greenlit.
Posted by Adam Whitehead at 19:14

I'd actually be more interested in seeing that then another half ass remake. I thought Momoa gave it all he had, but the script just wasn't there.

Ugh. Sorry guys, as much as people like Anold's conan, I'm still waiting for the DEFINITIVE conan movie.

I love the original Conan movie, one of my favorites... interested to see what they do here.

this could be so bad, that it might actually be good