THE EXPANSE renewed for sixth and final season

Amazon Studios has renewed The Expanse for a sixth and final season, in a highly surprising move. 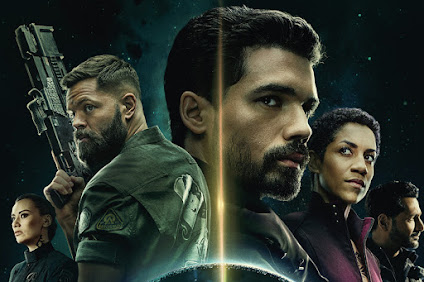 The Expanse aired for three seasons on SyFy before being cancelled by the network. The show's production company, Alcon, struck a deal with Amazon to pick up the show. The fourth season, which aired in December 2019, was the seventh-most-popular streaming show of 2019 according to some reports, behind Stranger Things, The Boys, The Crown and The Mandalorian, among others.

The fifth and now-penultimate season will start airing on 16 December this year. Season 6 will start shooting in January for a late 2021 or early 2022 debut.

The news will come as a shock to fans of the series. The novel series the TV show is based on consists of nine volumes, with Book 5 adapting the fifth volume, Nemesis Games, and the sixth likely to adapt Babylon's Ashes. The final three books - Persepolis Rising, Tiamat's Wrath and Leviathan Falls - will presumably not be adapted at all.

Alcon and Amazon's statements make it sound like the cancellation is pretty final, with no chance of moving to another network or streamer (to be fair, it's unclear if anyone else would be interested).

What will happen with the un-adapted books is unclear. There is a significant time jump between Babylon's Ashes and Persepolis Rising, leading to the possibility of the story being rounded off in TV movies or maybe a sequel mini-series at a later date, perhaps giving some time for the actors to age up a bit. Another possibility - compressing events of Books 6-9 into the final season - seems extremely unlikely given how much story and how many characters they'd have to go through.

Some previews for Season 5 suggest that the protomolecule/gate-builders storyline, which is pretty much benched in the fifth and sixth books, will continue to be a major subplot in the TV show, suggesting that perhaps that storyline will be brought up and moved to a conclusion in Season 6, so as not to leave any loose ends dangling.

Amazon and Alcon have also confirmed that castmember Cas Anvar, who plays Alex Kamal, will not return for the final season. Over the summer, sexual misconduct allegations surfaced against Anvar for his behaviour at a series of conventions several years before The Expanse began. The remaining cast and crew will return. It is not yet clear if the role of Alex will be recast or the character dropped between seasons.

I'd rather have six good seasons than nine bad ones. The Expanse breaks all my personal rules. Normally book content is superior to TV adaptations and I hate it when TV writers condense and move stuff around. But the Expanse series of books is so long-winded and diffuse, that I appreciate how the TV version has made a shorter and more digestible story. The characters are really good, but there's almost no set of characters that I want to follow through a series of nine 400-page books. Hopefully the writing team of S. A. Corey will write more content and future that is worthy of adaptation. I'd rather see something new than more of the same.