Joss Whedon steps down as showrunner of HBO's THE NEVERS

Joss Whedon has stepped down as showrunner of HBO's upcoming historical fantasy series The Nevers. Whedon cites the workload and schedule conflicts brought about by delays to filming caused by the ongoing coronavirus pandemic. 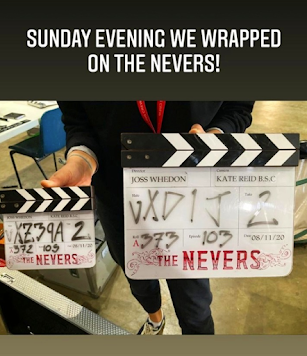 Whedon made his name in the 1990s as a writer on Roseanne and working on Hollywood movies including Toy Story, Twister and Alien: Resurrection, as well as his own original property Buffy the Vampire Slayer. Frustrated with how his scripts were constantly being changed by other people, he jumped at the chance to revamp Buffy as a TV series. The series aired between 1997 and 2003 and spawned a nearly-as-successful spin-off, Angel, which aired from 1999 to 2003. Whedon also produced the TV shows Firefly (2002) and Dollhouse (2009-10), along with a Firefly feature film spin-off, Serenity (2005), which marked his feature film writing/directing debut. Whedon also wrote and directed The Avengers (2012) and The Avengers: Age of Ultron (2015) for Marvel and Disney, as well as helping develop and launch the TV series Agents of SHIELD (2013-20). He also took over production of the film Justice League (2017) when director Zack Snyder had to step down following a family tragedy. The Nevers would have marked the first TV show he had completely helmed from start to finish in more than a decade.
Although Whedon cites other reasons for leaving, many commentators will be sceptical of his claims. In 2017, Whedon's ex-wife accused him of cheating on her with at least one and possibly more actresses in some of the shows he worked on, although specific accusations were not made. The news rocked Whedon's fanbase, which had previously praised him for his depiction of female empowerment in his work (although other critics had long held some of Whedon's writing to be problematic, particularly in Dollhouse and his alleged sidelining and then firing of actress Charisma Carpenter from Angel for becoming pregnant). The largest Whedon fansite shut down and his fans have been divided ever since.
In 2020 Whedon was accused of bullying and unacceptable behaviour on the set of Justice League by actor Ray Fisher. Initially Fisher's comments were not substantiated by other actors, but then Jason Momoa stepped forwards to back Fisher. Warner Brothers launched an investigation of Whedon's behaviour during production. Warner Brothers own HBO, meaning that this investigation would certainly have a bearing on Whedon's involvement on The Nevers.
The Nevers began shooting in July 2019 and completed production of five episodes prior to being shut down by the pandemic in March 2020. Filming resumed in September and was completed at the end of October. However, post-production and editing has only been partially completed.
Whedon's long-term writing and producing partners Jane Espenson and Douglas Petrie are also working on the show, along with Game of Thrones producer Bernadette Caulfield. It is assumed they will take over showrunner duties during the post-production phase and new plans will be made if HBO decides to renew the show for a second season.
Currently The Nevers is tentatively planned to air in the summer of 2021.
Posted by Adam Whitehead at 21:40