In not-unexpected news, Sony have delayed the release of The Dark Tower from February until the summer. For a film so close to release, they had not yet released any footage and reportedly could not get the effects finished in time. 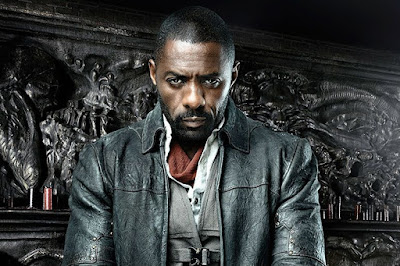 The Dark Tower - which may or may not have a subtitle - is based on Stephen King's novel series of the same name (but, confusingly, not the individual novel with that name, which concludes the series). Starring Idris Elba as Roland Deschain and Matthew McConaughey has his nemesis, the Man in Black, the film spans multiple realities and worlds. Despite its major stars and large scale, Sony got the movie made on an impressively restrained budget of just $60 million on a very fast turn-around.

A spin-off TV series is also in the works, which will also star Elba as he reminisces on Roland's early days.

Sony have not yet settled on a new release date.
Posted by Adam Whitehead at 18:57

I know what you mean. Usually, 'unofficially' (but not always) a series is named after the first book in the series: Red Rising, Game of Thrones (as it's better known as, even though its wrong), Hunger Games.... but with Dark Tower it's backwards.

Anyway, only 2-3 Stephen King adaptations are actually good: The Shining, Shawshank and The Green Mile. I don't know if anything on screen has been good since around when 1408 came out though. The Mist I heard mixed things about.

How many more days till summer?