Avice is an immerser, a person who flits between worlds by sailing the immer, the strange sea of time and space that underlines our own. To satisfy his curiosity, she takes her new husband to see her homeworld of Arieka, where the native Hosts communicate in a language unlike any other known to humanity and only specially-trained, genetically-engineered humans can talk to them. But back home in Embassytown she discovers that a new Ambassador has arrived, one with a different way of speaking to the Ariekei Hosts...one that may shatter their way of existence and endanger the human population of the planet. 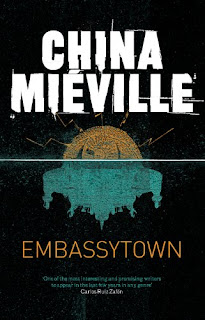 Embassytown is China Mieville's eighth novel and his first science fiction book. This shouldn't be taken to mean that Mieville has dramatically moved away from his traditional fare: this is very much still in the weird vein he is known for. Arieka is a world of uncanny bio-technology where farms and factories are living creatures, whilst the Hosts are an utterly alien, difficult-to-comprehend species whose thought and speech processes are totally different to that of humanity. Even Mieville's take on hyperspace - the immer - is a place where strange and bizarre things can happen. In Mieville's SF novel the usual SF trappings - spaceships, FTL travel, futuristic weapons - are given his typical weird spin, but it wouldn't be hard to re-set the novel on a remote part of Bas-Lag or in another fantastical milieu.

What does make Embassytown SF is its take on the idea of language. The notion of one species trying to talk to another when their reference frames, histories, backgrounds and ways of life may be completely different is a difficult and challenging one, but also something that SF has usually papered over with a universal translator or the like. Here the difficulties of communication between two different species are studied in depth. The Hosts can only understand language when there is sentient thought motivating it: they cannot understand recordings in their language, nor can they communicate with AIs. They also can only think in terms of the truth: the notion of lying is something so foreign to them that they can only barely grasp how it is done, though a few individual Ariekei boldly try to become liars themselves, giving rise to the vividly-described Festival of Lies that Avice encounters at one point in the book. This discontinuity is a minor weak point in the novel: if the Hosts can lie, even with difficulty, than over the course of millions of years they should have developed the ability to do so more freely. If they can't lie at all, than the climax of the book (which is a tad predictable) is impossible. Them being only able to lie with human intervention does open up some interesting questions about inadvertent colonialism, however, that are almost certainly intentional.

Mieville makes his aliens truly alien, so the only way to communicate with them is to make the human Ambassadors partly alien themselves through genetic engineering. Ambassadors are twins who are raised to think and act as one as a way of duplicating the Hosts' duality-based language. This in turn makes them something different to ordinary humans although, as is revealed several times throughout the narrative, not as different as perhaps first appears. This gives rise to an interesting parallel where humans have to alter themselves to talk to the Ariekei, bu the Ariekei cannot conceive of altering themselves to talk to humans...at least not until that decision is made for them, unwittingly, by the arrival of a new Ambassador. 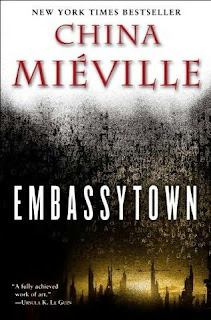 The book is a slow burn, with the opening half focused on exploring Avice's childhood (during which she is chosen by the Ariekei to become a living simile, a walking and talking embodiment of their language) and background before the action focuses on what is going on in Embassytown in the present. Whilst there is a major crisis in the book, one that leads to violence and a loss of life on an epic scale, Embassytown's writing is focused, intelligent and even quiet. The writing style is more like the pared-back City and The City rather than the chaotic Un Lun Dun and Kraken (the former enjoyably so, the latter rather more sloppily), which is a plus for me.

There are big events with major ramifications going on, but Avice is much more of a passive observer of events than an active protagonist, only stepping up to this role quite late on in the novel. This results in a lot of major plot movements happening off-page (several times Avice arrives on the scene of an important, game-changing event just after it's happened) and only being explained later on. This could be slightly frustrating, but in Mieville's hands it's a well-executed inversion of the more traditional (and implausible) format where the narrator is at the centre of every major event in the book. Here Avice is playing just one role in a larger cast, and we don't always get to see what everyone else is up to.

Avice herself is a well-defined but not entirely sympathetic protagonist. She's a bit of a snob, frankly, and invokes her travels to other worlds as an explanation for why she thinks she's better than everyone else. This results in amusing passages where Avice is frustrated because she's not involved at the centre of events. From her POV, she should be, but of course from the POV of the people running Embassytown there's no reason why she should. This frustration becomes more acute when the input of Avice's new husband, a linguistics expert, becomes more valued by the government than Avice's own contribution. It's a solid bit of characterisation that makes Avice more of a plausible protagonist at the risk of making her unlikable, though I think Mieville avoids that pit trap. The other characters in the book are mostly well-defined (especially Avice's robotic best friend and the half-Ambassador Bran), though the limited POV structure means we don't get to know them as well as characters in some of his other books.

Overall, Embassytown (****½) is a formidably intelligent exploration of language, colonialism and communication, not just between humans and invented aliens but between people and people. It raises interesting questions, doesn't give pat answers, and entertains along the way. It's not Mieville at his best, but it's certainly a strong novel and an interesting take on the traditional tropes of science fiction. The novel is available now in the UK and USA.
Posted by Adam Whitehead at 14:57

I've read two Mievilles by now (Perdido Street Station and The City and the City) and just bought Embassytown, so I'm rather intrigued by your comment that this isn't "Mieville at his best". Though I've only read two of his novels, I'm curious to know how you would define the Mieville quality-scale.

At the moment I'd rate Mieville's output as (best to worst):

Coincidentally I just finished Embassytown last night, and I mostly agree with your review. Good read, but not his best. However, there were a number of places where I felt the prose was awkward; I had to struggle to make sense of a few sentences, and often comma-separated clauses were inserted at odd points that left a single word hanging. Is this just me?