Staff at Trinity College Dublin were confused yesterday when they discovered, via the staff listings on the college website, that they had been joined by a new member of staff. 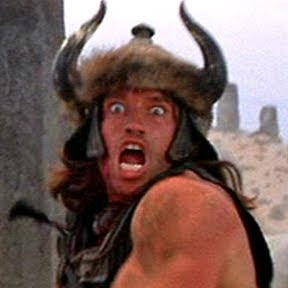 Dr. Barbarian is surprised by the negative reaction to his disemboweling a truculent student with an attitude problem.
The entry was for Dr. Conan T. Barbarian, B.A. (Cimmeria), Ph.D (UCD), F.T.C.D. (Long Room Hub Associate Professor in Hyborian Studies and Tyrant Slaying). According to his profile, he was "ripped from his mother's womb on the corpse-strewn battlefields of his war-torn homeland, Cimmeria, and has been preparing for academic life ever since. A firm believer in the dictum that 'that which does not kill us makes us stronger', he took time out to avenge the murder of his parents following a sojourn pursuing his strong interest in Post-Colonial theory at the Sarbonne."

Apparently, Dr. Barbarian's Ph.D was entitled To Hear the Lamentations of Their Women: Constructions in Masculinity in Contemporary Zamoran Literature and he was appointed to the School of English in 2006 "after successfully decapitating his predecessor during a bloody battle which will long be remembered in story and song." His courses for the 2011/12 academic year will be 'The Relevance of Crom in the Modern World', 'Theories of Literature', 'Vengeance for Beginners', 'Deciphering the Riddle of Steel' and 'D.H. Lawrence'. 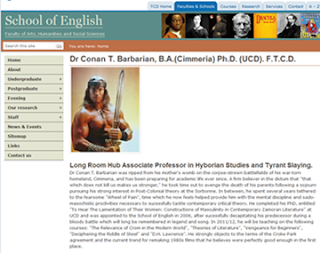 Conan T. Barbarian also registers his displeasure with "remaking 1980s films that he feels were perfectly good enough in the first place."

The listing has, sadly, been removed by the college, who said they were taking the incident 'seriously'.
Posted by Adam Whitehead at 12:55

That's awesome!! LOL, wish I could have seen that!

Oh, that is hilarious! And I don't know if one ought to be amused or depressed that they are taking it "seriously"? Love the caption for the picture - though I think he looks more "astonished" than "surprised".:)