A reboot of BEAUTY AND THE BEAST is in the works

American network The CW is developing a reboot of the late 1980s CBS fantasy drama series Beauty and the Beast (itself a retelling of the traditional story, moving the action to contemporary New York City). 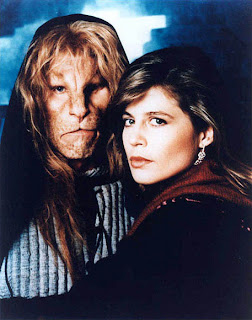 The show, which ran for 3 seasons and 56 episodes in 1987-90, starred Ron Perlman, Linda Hamilton and Roy Dotrice. It was created and run by Ron Koslow, but its highest-profile creative force was (and remains) George R.R. Martin, who worked on the show as writer, script editor and eventually a producer. The show started out with ratings of 20 million, but ratings and critical acclaim collapsed in the third season after Linda Hamilton's character was brutally and unexpectedly killed off, leading to cancellation.

The announcement comes just a week after ABC announced its own 'reimagining' of the original story.
Posted by Adam Whitehead at 13:13

I'm a devoted fan of the original & I'm nervous about a remake -But since devoted fans weren't consulted I'm trying to think positively -I have a long wish list: I hope Vincent still looks & acts the same -I hope Catherine (& he) are at least over 25 (Most fans worry the CW will make them teens) -that the only modernization is that Catherine has a cell phone & the procedural twist mentioned is that her job is more of an ivestigational one -that the tunnels & its dwellers are the same -that the show is well written, cast & acted -I think Amber Benson would make a good Catherine & Kevin Durand as Vincent

From the pilot script I've read this reboot is definitely not like the original -It should not have been promoted as such -While it is a beauty & beast type themed show, they shouldn't have named the main characters Catherine & Vincent -I had high hopes for a B&B remake, but I wanted it to be more like the original with all the romance & fantasy -I see none of that in this reboot, especially with the character of Vincent, who was once a unique, mysterious being with a gentle soul -Now he'll be a genetically altered hairy human super soldier? -I honestly thought the script was a joke & not authentic -I am truly disappointed that it was true --(Btw, In addition to original fans many new fans have discovered the series through the DVD's)