With the thirteenth Gaunt's Ghosts novel out in a matter of weeks, Dan Abnett has been doing the interview rounds and has shed some light on his forthcoming projects. 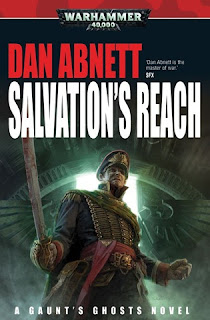 In this print interview, Abnett confirms that Salvation Reach - due out next month - is the second in the fourth Gaunt's Ghosts arc, 'The Victory'. There will be two more books in this arc, followed by a fifth arc of either two or three books.

In this video interview, Abnett confirms that he is returning to the Inquisition setting of the Eisenhorn and Ravenor books for a third and final trilogy, known as the Bequin series (with the unofficial subtitle 'Eisenhorn vs. Ravenor'). The first of these new books should be out late next year.

Meanwhile, the second Triumff novel, The Double Falsehood, appears to have been delayed until early 2012, though no firm release date has been set yet.
Posted by Adam Whitehead at 19:45

I got into the WH40k books because of you, Wert. I was looking for sorta mindless fun and got way more than I bargained for. So, thank you for that and I'm glad you keep stumping for new readers to get in there.

One more Gaunt's Ghosts arc after this one finishes? Yes! Also, more Eisenhorn and Ravenor? Yes!

At this point, I'm hoping for more Ciaphas Cain books.

The run of Horus Heresy books from Legion on down to Prospero Burns have all been excellent. I'm surprised by how well the Black Library writers are dealing with the concepts and stories.

Is there any news on the continuation of the Malus Darkblade series? Loved the two omnibus books and am craving more!