The Man Who Crossed Hitler

Berlin, 1931. Several members of the SA, the paramilitary wing of the Nazi Party, attack a gathering of Communist workers and kill two of them. Jewish lawyer Hans Litten is prosecuting those responsible. On the advice of a colleague, he subpoenas Adolf Hitler, rationalising that the attack is a breach of Hitler's promise the previous year that the Nazis had renounced violence as a means of gaining power. This leads to the extraordinary spectacle of Hitler being closely cross-examined on his ideology and motives for three hours straight as Litten tries to show that Hitler has perjured himself. If he can prove this, Hitler will be arrested and his ascent to power halted or, at the very least, delayed. 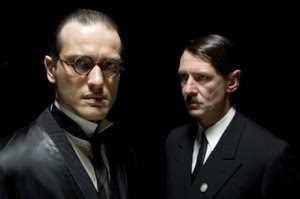 The Man Who Crossed Hitler is a BBC TV movie based on the confrontation between Litten and Hitler in a Berlin courtroom on 8 May 1931, the events leading up to it and some of those that followed. Ed Stoppard plays Litten (then only in his 20s) as a driven young man committed to thwarting the Nazis' rise to power, even if this means allying with Communists, whilst Ian Hart portrays Hitler as a master of rhetoric and speech-making when in his element, but outside of his comfort zone finds himself initially out-foxed by Litten's arguments. Bill Paterson is the judge who has to orchestrate the trial but is himself conflicted over how far to push the pursuit of Hitler.

The film is driven by uniformly excellent performances (Sarah Smart as Litten's aide and Ronan Vibert as an SA commander opposed to Hitler's handling of the organisation are particularly good) and some superior writing and characterisation, particularly regarding the clash of Litten's investigative and legal skills with his own ego. Because Nazi rhetoric was essentially contradictory and confused, Litten believed it would be a duck shoot to bring Hitler down, so he was unprepared for Hitler's ability to turn the situation to his advantage (and the situation is not helped by a judge who has one eye on his own status in a future Nazi-led Germany) and was left bemused by the growing popularity of the Nazis amongst the common people of Germany. In fact, the film suggests that Hitler's time on the stand may have have even strengthened his popularity, a conclusion that is debatable: Hitler, for his part, was severely unnerved after the incident and refused to have Litten's name even mentioned in his presence after that point.

The film has a dark edge to it, since we know (obviously) that Little ultimately failed to have Hitler arrested for perjury and his ascent to power continued unchecked. It also doesn't take much foresight to work out that things will not work out well for Litten and this is ultimately shown to be the case through a closing piece of text, presumably because a dramatised account of Litten's time in prison under the later Nazi government would likely be too harrowing to make comfortable viewing.

There's an old-fashioned edge to the film. It uses only a few sets and a small number of actors, but it packs an enormous amount into its 90 minutes: the dialogue is first-rate, the actors do their jobs well and the film succeeds in its primary aim of highlighting a curious and under-reported incident from the life of one of history's most infamous figures.

The Man Who Crossed Hitler (****½) is compelling viewing. Unfortunately, it is not yet available on DVD or Blu-Ray and it is unclear if or when it will be released.
Posted by Adam Whitehead at 16:12

Email ThisBlogThis!Share to TwitterShare to FacebookShare to Pinterest
Labels: the man who crossed hitler

I totally agree with you. Even knowing what happened to Litten, I still sat glued to the TV. It was very definitely compelling viewing.

What the film really made evident was the just how foolish Litten and his contemporaries were, believing that Hitler was just a passing fad and no real threat.

They all thought that, that's what made Hitler that succesful in the end...unfortunately.