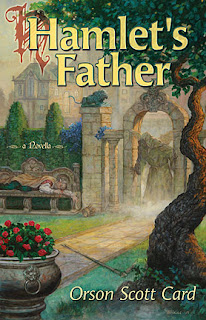 Hamlet's Father was actually written a few years ago and appeared in a few anthologies, but a new, stand-alone edition from Subterranean Press is due out soon. The new version of the story removes the complex characterisation and thematic development of Shakespeare's play and instead proposes that everything bad that happens in the story is down to the fact that Hamlet's father was homosexual. In fact, we learn that Hamlet's father was not only gay, but managed to infect a number of other characters (Horatio, Laertes, Rosencrantz and Guildenstern) with teh gay as well by molesting them as children. Hamlet's father maintains his menacing gay ways even in undeath, and it is implied that at the conclusion of the story Hamlet's spirit will be taken to Hell by his gay dad and have gay things done to him for all eternity. Potential readers are advised that reading may have to be undertaken with earmuffs, lest you be distracted by the sound of an axe being ground in the background.

Naturally, this hilarious nonsense lends itself well to satire, and Scott Lynch has already taken up the baton. There have also been a number of complaints to SubPress about the book, enough that they have posted a response on their website.

A rumour that Gary Oldman and Tim Roth are considering reuniting to make Rosencrantz and Guildenstern Are Now Benders, Apparently, based on the Card book, cannot be substantiated at this time. Mainly because I just made it up.
Posted by Adam Whitehead at 10:35

This man's existence is beginning to make me really angry... And not only because it concerns me personally. Ugh... Anyway, I posted about it too, if you're interested:

I quite like Bill's response - he has the caveat that it's been published before but also says that they're willing to listen to readers' complaints and take them on board.

I haven't always been Bill's biggest fan, but that response I do like.

Oh and I've never read Card's work before but was planning on getting tot he Ender novels - are they overtly homophobic as well? Actually don't answer that, I don't really care so long as they're a good read.

Well, they can't be a good read if they promote any kind of hate (not due to principles, it's just that propaganda literature of any kind always sucks), but no, they aren't. There is some Mormon stuff in the later installments, but the original Ender's Game is clean.

That said, I cant even recommend that one in good conscience any more...

wow. just wow. and and Card keeps claiming he is not homophobic???