The City, 2067. China has overrun and conquered most of Eurasia and the stacks of the City now sprawl across the ruins of old Europe. In the Middle-East, the Chinese meet fanatical resistance in the form of suicide bombers and terror tactics, whilst across the oceans the shattered remnants of the United States try to fight back. But the Son of Heaven, Tsao Ch'un, will brook no opposition and prepares the largest military campaign in human history to bring North American under his rule. But as armies march and missiles fly, Tsao Ch'un himself, now old and paranoid, is becoming increasingly unstable. As the seeds of civil war are sewn, will the new world be destroyed in its infancy? 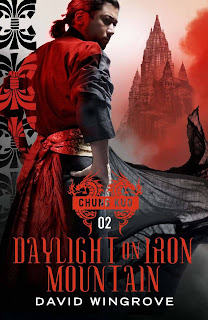 Daylight on Iron Mountain is the second novel in David Wingrove's 'recasting' of his epic Chung Kuo series, which is now planned to expand across twenty novels. Daylight was originally the closing part of the first book, Son of Heaven, a newly-written prequel novel, but at his editor's suggestion Wingrove pulled out and radically expanded the Daylight segment into a full, 350-page novel. This turns out to have been a masterstroke of an idea: Son of Heaven was effective in a low-key kind of way, but as I said in my review I was concerned that it didn't really seem to be setting the scene for a colossal twenty-book series. Daylight ends such concerns in one fell swoop.

Daylight on Iron Mountain may be (relatively) short on page count but is rammed to overflowing with political intrigue, corporate scheming, desperate struggles for human survival and, in the final section, a mind-boggling war which is vast in scope. One storyline follows the political infighting as the Seven (Ch'ung's key advisors) realise how unstable their leader has become and debate what is to be done, whilst another sees Jake Reed (the main character in the first novel) struggling to survive in the new world of the City. A further subplot sees General Jiang Lai, an honest man in a dishonest world, trying to keep his head above water as enemies gather on all sides.

Wingrove juggles these plots with skill. He doesn't have the page count to indulge them in the way an epic fantasy writer could, so he keeps the storylines moving rapidly and in tandem, flitting from one to another. At times the book feels a little rushed - the concluding conflict feels like it should be unfolding over weeks or months, not just days - but Wingrove doesn't neglect some key scenes of character-building, or employing thematic irony (the epilogue in particular features an element that feels like something out of the Soviet Union, or indeed Chinese Communist history) to hint at greater events to come.

As well as being rather slow, the main criticism that could be aimed at Son of Heaven was that it had a tendency to drift towards stereotyping in its portrayal of the Chinese characters. It's a massive relief that this problem does not exist in Daylight on Iron Mountain. The characters, Chinese or otherwise, are a gallery of heroes, villains, the selfish and the selfless, or people simply trying to survive however they can. Normally cold-hearted lawyers show unexpected compassion, one of the most powerful men on Earth gives way to grief when he pays the ultimate price for victory and generals take time to consider the moral implications of the deaths they are about to cause. Unfortunately, this nuanced approach to characterisation does not extend to the primary 'villain', Tsao Ch'un himself, who is more of a cliched antagonist with a side-line in personally torturing prisoners and smashing up priceless antiques with a baseball bat to show how evil he is.

Beyond this element, Daylight on Iron Mountain improves on Son of Heaven in every single way. There's a larger and far more interesting cast of characters, there's some impressive action and war sequences and there's a relentless drive to the book's pacing as the characters are swept up in the march of history. A few characters (most notably Ch'un) suffer a little from the fast - sometimes rushed - pacing, but overall this is a compelling, page-turning SF epic which leaves the reader eager for more.

Daylight on Iron Mountain (****½) will be published on 1 November 2011 in the UK. There is no American publisher for the series at this time, but copies should be easily available through the Book Depository.
Posted by Adam Whitehead at 13:00

I live in the US and was able to get Son of Heaven on my Kindle through my regular Amazon store. Is there no possibility of getting the sequels the same way?

I would hope the second book improves on the first. That I found to be so tedious in plot, so bland in writing and the hero so dull I wish he had been killed off to generate some interest. I barely made it to the end. Hugely disappointing.
I read the originals when they came out and enjoyed them far more. However, to re-release them now as two books each when the bulk of them were under 500 pages smacks of a cynical money making exercise. It's completely unnecessary. - Ian

If SON OF HEAVEN could be purchased for Kindle in the States, I imagine the second book will be as well (in fact, as a relatively smaller publisher it's a smart move by Corvus to open themselves up the US market if that is the case). However, as of a few hours ago when I last checked, Amazon US are not listing the second book yet.

I agree that publishing the books as 10 600-800-page volumes rather than 20 300-400-page books would be preferable from several angles (I've heard people saying they won't read such a huge series, then expressing surprise since the total word-count is still way below that of WHEEL OF TIME or the MALAZAN series). However, my understanding is that Corvus are taking a substantial financial risk with this project and breaking the books down this way minimises their potential losses if things do not go well. From an artistic point of view, combining SON OF HEAVEN and DAYLIGHT ON IRON MOUNTAIN would also not make a huge amount of sense, as the massive mid-book upward shift in pace and incident would be very jarring. Also, apparently the already-written books have been comprehensively re-edited and many to most of them will have new material added (Books 1-2 are brand new, so are the last couple, and the 'old' Book 8 has been completely gutted, rewritten and re-edited), though the extent of this is unclear.

Hopefully, if the series is a mega-success, we might see future omnibus editions in the distant future. It'll also be interesting to see if a US publisher picks up the project and whether they'd want to stick to the twenty-short-books or maybe switch to a ten-longer-ones format.

I can understand the reluctance of the publishers to put all their eggs in one basket. But at the end of the day, I have no intention of buying them again (except perhaps an update of the last original volume). Surely by the time you publish four or five volumes, you know whether its selling or not and could revert to the original format. Cheaper too I would have thought. - Ian

Daylight is available now as a Kindle ebook on both Amazon.com and .co.uk...