New cover art for the SHADOWS OF THE APT series 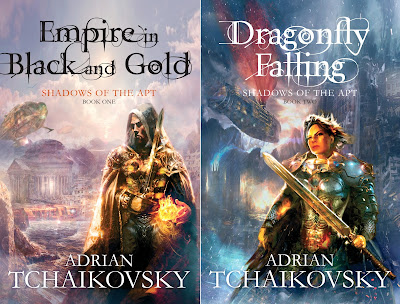 Tor UK are reissuing Adrian Tchaikovsky's Shadows of the Apt series with new cover art by Alan Brooks. The new covers for the first four books are shown here, though these are not 100% finale yet. This move accompanies Tchaikovsky's promotion to trade paperback status with the latest novel in the series, Heirs of the Blade (the seventh of ten planned volumes). Heirs of the Blade is already out in the UK in tradeback, with the standard paperback to follow in February. 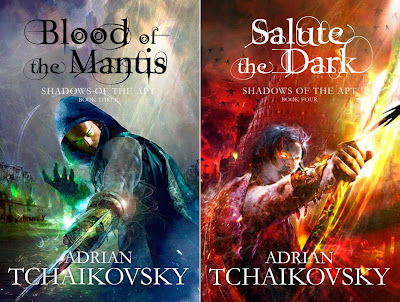 The new covers should appear on the books next year.
Posted by Adam Whitehead at 13:30

I really don't like these, and they're not much of an improvement over the Tor UK Jon Sullivan covers. Pyr's covers (Also by Jon) are absolutely stunning and really, in my opinion, capture the feel of the books.

These new ones are really blurred and I don't like the fonts they've chosen. It feels as if there's just too much going on with them.

The blurring might be down to these being roughs (though fairly-advanced ones, given they're in full colour and so on). Otherwise, I agree that I like the clearer, focused original ones a little better.

Man i like these. They are way better then the US versions.

There is something to be said for Impressionism in fantasy, i think maybe the artist was going for a slight impressionistic feel.

Cover Artists who try and put a realistic photoshop job on a cover, for instance the new Deas cover posted on A Fantasy Reader is very sharp but suffers from it i think.

StD looks like a rip off from the USA version cover I have. This new cover looks like Artist just taken that picture and painted over the pose is almost identical.

Kathryn I would say the later UK previous covers are excellent.Sea watch and more so Heirs of the Blade are stunning covers.

I don't care for these as much as, like Kathryn said, the Pyr Jon Sullivan covers. They are the best.

Beyond that, isn't that meant to be Tynisa on the DRAGONFLY FALLING cover? Is it a nitpick to point out she wields something more akin to a cutlass, not a broadsword?

I had no idea the new book was out in TPB.

Will the rest of the series be released in normal paperback with similar covers to the old ones or do we once again have a series that has changed mid-way through?

If it's changed I'll buy the TPB for the last 4 books, if the PB will stay the same then I'll keep getting that. I HATE it when they change mid-series (like Erikson) but understand why they do it.

Scott; I believe it isn't. I can't remember who it is but it's not Ty.

ScienceFaction; But Sea Watch and Heirs are exceptions. Upto roughly book five, the covers are mostly Hobb-esque in that there's just a single figure under the title. Once you get to Sea Watch it turns more into, well, a more telling style of cover.

AFAIK, the series will now be released in tradeback first, then normal paperback 3-4 months later. I don't know if it's still the standard paperback size of the first six books or if they've changed to B-format, which would be extremely annoying. HEIRS OF THE BLADE's paperback is due out in February 2012.

Eh bugger it, I'll buy the new book in TPB and rest of the series in the same. So many series' all look different on my shelf these days that it doesn't matter too much I guess.