Andy Whitfield, star of the first season of Spartacus, has sadly lost his battle with non-Hodgkin lymphoma and passed away at the age of 39. 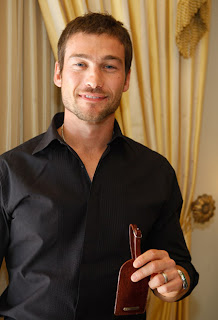 The Welsh-born, Australian-raised actor was cast in the role of the titular gladiator for the show's first season, Blood and Sand. The initial occurrence of the disease saw him leave the series and the producers decided to create a prequel mini-series revolving around other characters, Gods of the Arena, rather than continue without Whitfield. They hoped he would be able to return for the role after treatment. Whitfield successfully overcame the illness, but several months later suffered a relapse. He gave his blessing for the series to continue with a new actor, Liam McIntyre, in the title role for the 'proper' second season, Spartacus: Vengeance, which is slated to air in 2012. Whitfield is survived his wife and two children.

This is sad news. What I've seen of Spartacus (I was planning to get the DVD box set at some point) was very promising and Whitfield seemed to be doing a great job in the role. Condolences to his friends and family.
Posted by Adam Whitehead at 13:15

Man that's a tough one... The guy was in shape and clearly lived a healthy lifestyle. RIP Andy.

Very sad. I didnt get into the show, but my Mom was a huge fan. It's always very sad to see young good people with such talent leave us before accomplishing all that they are able to. RIP and my prayers go to the family

A tragic shock! My prayers are with his family.