In an interview with SFFWorld, Christopher Priest discusses some of the projects he's working on at the moment. He's currently finishing off his next novel, The Adjacent, and has plans for a further novel after that, The Mariners, as well as a stage play. In the meantime, his next novel, The Islanders, will be published in the UK at the end of the month by Gollancz in the UK. 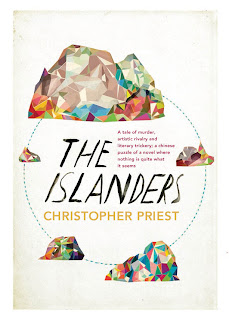 Some interesting stuff in the interview, such as how his lengthy break from writing after The Separation has resulted in a sudden explosion of new ideas and projects. Also interesting is that Priest seems to have cooled somewhat on Chris Nolan's adaptation of The Prestige and his subsequent projects, with some interesting discussion of why that may be so.

The Islanders remains my most eagerly-awaited book of 2011, and the news we won't have to wait ten years for his next novel is very welcome indeed.
Posted by Adam Whitehead at 16:38

Email ThisBlogThis!Share to TwitterShare to FacebookShare to Pinterest
Labels: christopher priest, news, the adjacent, the islanders, the mariners

His answer to the Chris Nolan question was disappointing. I love both the film and the book, in fact I believe that one thing the film managed better was to portray the rivalry between the magicians with some more balance.

I always thought of the novel as very much Angier's book, and that Borden wasn't as well developed. Or maybe I just missed the whole point.

(Also, Nolan had already done Batman Begins by then so I don't get the "too many Batman films" remark. Nor do I agree that he's gone downhill)

I must confess that Christopher Priest has not been on my radar. Which book (or books) from his back-catalogue would you recommned?

If you click the Chris Priest tag at the bottom of the article, that should take you reviews of several of his books. I believe there are reviews of A DREAM OF WESSEX, THE SEPARATION, THE PRESTIGE and THE AFFIRMATION on the blog.

I think he's annoyed with the 'don't read the book, watch the movie' quote. But he optioned the book, got paid for the movie rights so it's not like he has his IP stolen.

As for his works, I've read The Time Machine and The Pestige and looking forward to his new book. Very gifted author in my opinion if a little eccentric.

Jay: and he's not acting like he's had his IP stolen. He's acting like someone he thought he could get along with well, even admire, has acted like a total dick to him. And yes: adapting a succesful novel into a film and then telling people NOT to read the book is acting a little like a dick. It's not showing Priest the respect he deserves - as a great, award-winning author in general, and as the guy who was ultimately responsible for a large part of what was succesful about the film in specific. Normally you'd expect directors to say "yes, I'm really proud of my film, but you know we worked with some fantastic material - Chris Priest is a great author, and you know I think it's a shame more people don't read his work - we hope this film will bring his books to a wider audience". Not "oh, i hear there's some guy, don't know his name, he's written a book that's got the same name and it's really similar, kind of pisses me off really because if you read it it'll totally spoil my brilliant film for you, so tell everyone not to read it!".

Plus, he's right: Nolan has made too many Batman films and has gone downhill. The Dark Knight had enough popcorn and explosions to be a summer blockbuster, but if you watch it again, without the hype, and in particular without the aura of sanctity leant it by Ledger's death and beatification... in many ways it's a turd of a film. Not entirely, and he polishes it up very well - but I worry about his future films. There's usually one or two films/books/whatever where you can tell there's something wrong but it's good enough to be popular, and then the polish goes and there's nothing solid beneath. But hey, maybe (hopefully) the next film will be a return to form.

JamesY: i've read The Prestige and The Affirmation. I think the Prestige is the better of the two, and probably the more accessible as well. The Affirmation feels like a smaller work in every way (Punch Drunk Love, to The Prestige's Magnolia) - if you like it you'll love it, but there's less to like than in the Prestige, which is a really fireworky book (in a tasteful, controlled way). The Prestige is one of the few books I can recommend to everyone - the most literary snob can admire the prose and the craft and the ingenuity, and the most straightfoward, no-nonsense part-time reader can enjoy a damn good story with some totally unexpected twists.