Best-known for his immense doorstoppers, Peter F. Hamilton is also an experienced writer of SF short stories. Manhattan in Reverse is his second collection of short fiction, collecting together seven stories published over the last eleven years. Unlike his first collection, A Second Chance at Eden, where the stories were all set in the same universe, this time around the fiction is not linked by any theme or setting. 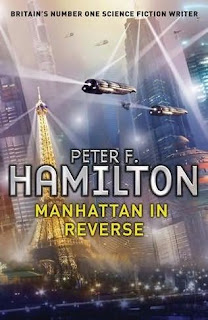 First up is Watching Trees Grow, previously a stand-alone novella published by PS Publishing. The novella is a riff on one of Hamilton's favourite subgenres, the SF mystery thriller, this time set in an alternate history where the pace of technological development was much faster than in real life and there are electric cars on the streets of Oxford in the early 19th Century. A murder takes place and one man becomes obsessed with tracking down the killer...even if it takes centuries. An effective and clever story, riffing on traditional SF tropes about extended lifespans, alternate timelines and technological development.

Footvote is a political satire, in which a politician opens a wormhole to another planet, allowing people to escape from early 21st Century Britain to make a fresh start, but will only allow a narrow definition of people through, resulting in social unrest. One family is torn apart in the resulting chaos. It's an interesting story about escaping responsibility for your actions, but suffers from having some quite dated references already (Gordon Brown as British PM etc). There is a nice line in humour, though, with the constitution for the new planet (which bans traffic wardens from emigrating) apparently designed with Daily Mail readers in mind.

If at First can be seen as a bit of a dry run for a certain storyline in The Evolutionary Void. In this story a police detective finds himself pursuing a criminal and is inadvertently sent back in time to an earlier point in his own timeline. Given the chance to 'start again', he uses his immense knowledge of future events (and future hit pop songs) to build himself a fortune, only to forget his original purpose. It's a funny time travel story with a bleak, but not entirely undeserved, conclusion.

The Forever Kitten feels like Hamilton setting himself an impossible challenge: writing a story in just 1,000 words (or 1/450th the length of The Naked God) for a magazine article. He pulls it off, with a frankly disturbing finale that could bear revisiting in a longer story or novel.

The book is rounded off by three stories set in his Commonwealth setting: Blessed by an Angel is scene-setting stuff for the Void Trilogy, establishing the tensions between the Higher and Advancer cultures and also providing family backstory for a major character from that series. The Demon Trap is the best story in the collection, pitting Paula Myo against an opponent who goes to immense lengths to avoid capture, but who in the end cannot escape responsibility for his actions. Manhattan in Reverse again features Myo, this time investigating an anomalous series of events on a frontier planet flooded with refugees from the Starflyer War. It's effective and entertaining - Myo is rapidly becoming Hamilton's signature character and is one of the better-realised female protagonists of recent SF - but the ending is a little too neat.

Overall, this is an effective and varied collection, with Hamilton revisiting some established themes (longevity, the notion of political responsibility and time travel) and, intriguingly, exploring some ideas that would later come to fruition in the Commonwealth and Void novels. If the collection has a problem, it's that it's way too short: Hamilton has a significant number of pre-2000, non-Confederation short stories that did not appear in A Second Chance at Eden and I was hoping they'd be included here (including - fascinatingly - two collaborations with Graham Joyce and a Greg Mandel novella). Instead we only get seven stories, resulting in a hardcover that is only 260 pages long. Sure, the content is what matters and these seven stories are all at least interesting, but the missing of the opportunity to make the collection more extensive and exhaustive is somewhat frustrating.

But based on what does make it in, Manhattan in Reverse (****) is a solid enough collection of readable, clever and thought-provoking stories from an author who is as comfortable with the short form as he is the half-million-word mega-novel. The collection officially isn't out in the UK until 7 October (though my local bookstore has copies in now) and will be published on 28 February 2012 in the USA (though apparently only as an ebook).
Posted by Adam Whitehead at 22:05

I thought it was unpublished, but I'm told it may have actually appeared in INTERZONE at some point. Though that furthers the mystery of why it's not in this collection.

As for Confederation/Night's Dawn, PFH told me that he has an idea for a follow-up story but it may be some time before he gets round to doing it.

Apparently, it also appeared in an SF anthology edited by Dozois (in the UK and the US): http://www.isfdb.org/cgi-bin/title.cgi?89767

I was also hoping for the Mandel story to be included and am a little disappointed.
Hope it will be put in a future collection.