The Book of Transformations by Mark Charan Newton

Emperor Urtica rules over a nation threatened from within and without. Hordes of invading creatures are threatening the northern islands, where the city of Villiren is commanded to hold out against impossible odds. However, with most of the imperial armies dispatched to Villiren, political intrigue and anarchic violence are taking hold of the streets of Villjamur, the capital. To combat the threat, Urtica recruits three individuals and transforms them into super-powered warriors, the Villjamur Knights, but must use a mixture of threats and promises of rewards to keep them in line. 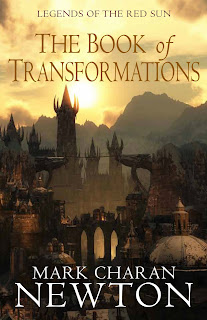 Meanwhile, a priest arrives in Villjamur on a quest that has already seen him marked for death by the region's dominant religion. He seeks to expose a lie that has defined the history of the Boreal Archipelago, but in doing so may trigger events that he and the world are unprepared for. Far to the north, Dartun Sur and his band of cultists have returned from the invading creatures' homeworld and rush back to the capital to reveal their findings...in a manner that no-one is expecting.

The Book of Transformations is the third and penultimate volume in The Legends of the Red Sun, following on from Nights of Villjamur and City of Ruin. Like the earlier books in the series, it places a number of self-contained narratives in the context of a longer, more epic story. This time around Newton gives us the story of Lan, a woman born in a man's body, who undergoes a sex-change operation fuelled by magic (or, more accurately, relic technology) only to find herself pressganged into the Knights and kept in service by blackmail.

It's unusual to see transgenderism raised as an issue in a secondary world fantasy novel, but Newton ties it in expertly with the book's overall theme of personal transformation, whether it's physical, spiritual or ideological. Almost every character is undergoing a metamorphosis of some kind, some voluntary, others not, and Lan's transformation is handled sensitively and fits in with the overall theme of the book very well.

Elsewhere, Newton's skills with atmosphere remain strong, with the snow-shrouded streets and rooftops of Villjamur remaining an evocative setting for the action. Character-wise, he gives us some memorable newcomers and brings back a couple of older hands (though not many; the book takes place simultaneously with much of City of Ruin, so the characters from that book are not present) to keep the plot ticking over. This is where the book starts to run into problems: there are a lot of characters doing a lot of things that need to converge for a grand, world-shaking finale that is undoubtedly meant to be epic, jaw-dropping and leave you on the edge of your seat until the final book is released next year. Unfortunately, this doesn't really happen.

The narrative seems to run out of drive some distance before the end. The problem is that Newton is at his best when engaging with interesting issues in a manner that is thoughtful and based in characters' emotions. That's not to say he can't do great mayhem - City of Ruin had some splendid battle sequences - but to do so he needs to root scenes of chaos and combat with characters we've become emotionally invested in. Book of Transformation's key weakness is that there's so much going on we haven't really had time to get really acquainted with the characters to make the huge scenes at the end of the novel come to life. In particular, whilst Lan is well-written, her two fellow Knights are much more lightly-sketched with only hints at depth rather than real exploration of their characters. Hinging so much of the climactic action sequences on their exploits thus falls flat. Similarly, the priest Ulryk is an interesting character with great potential, but he never really comes to life, and Inquisitor Fulcrom's desire to help him feels a bit random, something that has to happen for the plot to work regardless of whether or not it makes sense in terms of character motivation.

The cumulative effect of this is that instead of a vast, awe-inspiring and grand climax, we get something that is, at best, perfunctory. On an intellectual level, lots of interesting things happen at the end, but there is little emotional power to them. Newton's prose, which can be richly atmospheric, feels flat and rushed as he moves to the climax. Scenes featuring huge amounts of devastation in which hundreds of people die feel distant and unengaging, whilst the arrival of what is apparently a major new character at the end passes by with little impact. The problems with the climax are in fact highlighted by how good the first half of the book is, particularly the success Newton initially experiences in exploring these themes of transformation and alteration.

The Book of Transformation (***½) starts off promisingly with some well-realised characters and ideas being explored, but then it tails off as the climax approaches. The ending of the book feels rushed and under-written in comparison to what has come before, but Newton manages to hold things together just well enough to make the final novel an interesting prospect, provided he can avoid the same issues next time around. The novel is available now in the UK and on import in the USA.

Email ThisBlogThis!Share to TwitterShare to FacebookShare to Pinterest
Labels: book of transformations, legends of the red sun, mark charan newton