REM call it a day

American rock band (or 'alternative rock band' in Americanese) REM announced today that they were splitting up after 31 years of making music. This news was surprising, since it feels like a very old-fashioned thing for a band to do. It's more common now for bands to take half-decades off or simply keep soldiering on like the Rolling Stones. It's also quite brave: announcing that you are splitting up only to get back together a few years later always feels rather lame. Generally speaking, these days bands only split when, for example, one member of the band tries to (allegedly) attack another with a guitar to the face. 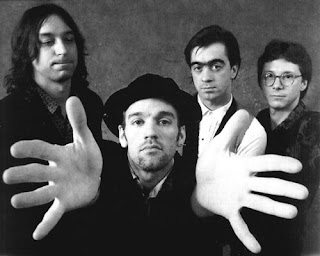 But back to REM. My years as a teenager coincided with REM's first eruption as global superstars in the early 1990s (I was 13 when Automatic for the People was released, though I didn't get into the band until a couple of years later), so they were pretty hard to ignore. Their oddball mix of acoustic melancholia and occasionally-satisfying rock-out moments was highly appealing, and I lapped up most of their albums in this period. Automatic and Document are two of my favourite albums of all time, and I highly rate Fables of the Reconstruction, Murmur, Out of Time, Green and New Adventures in Hi-Fi. Monster was probably a bit of a misstep (for albums that bring the rock, there are much more impressive mid-90s alternatives, though some tracks are very good) but I found Up to be an interesting experiment with changing their sound and bringing in new elements in the wake of drummer Bill Berry's departure. Reveal was, for me, a storming return to their normal melodic form, but Around the Sun was flat-out terrible, a low point that they recovered from with enthusiasm with the fast-paced Accelerate. Their latest - and now last - album has gotten enough mixed reviews that I haven't tried it yet, though now I think I will give it a go for old time's sake.

Sadly, I only got to see REM play live once, in July 2005 at Hyde Park in London. It was the end of their huge Around the Sun tour and they were clearly tired. But, just a week after the 07/07 bombings in London (and, though of course we didn't know it at the time, a week before a second attempted bombing attack on the city) when people were feeling a bit down, REM did a great job of getting people up and moving. Most surprising was when, instead of plumping for a cheap, sentimental and obvious rendition of 'Everybody Hurts' as a lesser band would have, they turned it up into an angry burst of guitar-driven defiance that was counter-intuitive and worked brilliantly.

So farewell to REM. Good on them for knowing when to quit, and if they decide to reform in ten years' time for another tour I won't hold it against them too much :-)

Here's a live performance of 'Country Feedback' from the Jools Holland Show in 1998 (later included as a B-side to the UK release of 'At My Most Beautiful'), featuring legendary steel pedal guitarist BJ Cole as well as core bandmembers Michael Stipe, Mike Mills and Peter Buck:

Wow, massive news. I feel similarly about many of their albums to you. I would recommend their latest; at the very least, it's an interesting document where, in the words of a friend, you can play an intriguing game of 'which album does this track belong in?'; and considering the news, that takes on some new significance!

Funnily enough, that Hyde Park gig was the one time I've seen them live as well! An incredible couple of hours, one of the best gigs I've been to. 'Walk Unafraid' was a highlight, one of my favourites. And shame about poor old Patti Smith forgetting her minimal lyrics during 'E-Bow the Letter'!

I love their early stuff , New Adventures is probably one of my favourite albums from my teens, listened to on repeat one summer as I read the the Lumley Necroscope books back to back :) Good times

I was a big fan of REM back in the day, and their music is still part of my regular ipod rotation. They've had a hell of a run, and i wish them nothing but the best in whatever pursuits they take up.

Wow, i still remember their small cameo on Sesame Street, too! :D

As someone from Atlanta, I got to see these guys many times back before the rest of the world caught on. The first time I saw them was at the Agora Ballroom in 1983 and paid .96 cents to get in. Also say the them several times in Athens at the 40 Watt Club and Tyrone's.

RIP REM. We had some damn good times together.

Me too. The only concert I saw was from Around The Sun tour. They should give us a great sendoff with a round the world farewell tour.

Knowing when to quit?
They should have quit more than ten years ago!
New Adventures in Hi-Fi was their last good album and it was one of their best I think.
I loved them during the 90s, but find them mostly dated today. Still, Automatic for the People remains one of the best albums from the 90s.

rem's 'Around the sun' - am i the only person on earth who liked it?