A full-scale Ork invasion of the Imperium forge world of Graia is underway. Millions of greenskins are taking part in the invasion, swamping and overrunning the defending militias and Imperial Guard forces. Graia's role in manufacturing Titans - Imperial war machines of vast size and power - means that the standard cleansing bombardment from orbit is not possible, so the Space Marines are called in. The Second Company of Ultramarines under Captain Titus are deployed to halt the invasion, secure the Titans and destroy the invaders by any means necessary. 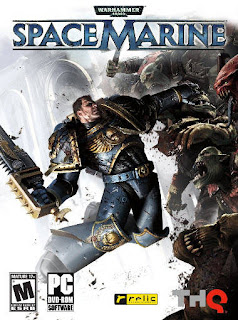 Space Marine does pretty much what it says on the box: it puts the player in the feet of a Space Marine, an eight-foot-tall, genetically-engineered super-warrior created for the sole purpose of defending humanity against myriad alien threats and heretical insurgents. The game is a third-person action title blending shooting with melee combat. Engagements typically begin with long-range exchanges of fire before closing down the gap and attacking with close-in weapons (players are advised to hold off and pick off enemy heavy weapons first before closing to melee, as the enemy have no compunction about mowing down their own troops if it kills you as well). In contrast to a lot of recent action games, the game has no cover system as the ethos of the Space Marine is to constantly attack and stay on the attack. Hiding behind a crate and sniping at the enemy for ages is considered both dishonourable and also damaging, as it delays the fulfilment of the Emperor's Will.

To encourage a highly aggressive play style in keeping with the setting, Relic have used several clever systems. One of these is a melee combat system that allows you to build up special attacks and chains of attacks through constantly staying on the offensive. The other is the game's health system, where the only way to regain lost health is to engage in melee combat and carry out special 'finishing' moves on stunned opponents. Thus, gloriously counter-intuitively but in-keeping with the battiness of the Warhammer 40,000 world, if you are low on health the best course of action is to charge straight into the middle of a pack of enemies with chainsword whirring.

This focus on melee and de-emphasis on stand-off firefights means that the Gears of Warhammer comparisons that have been floating around aren't very accurate. The game also makes use of the extremely rich and well-developed setting to give the story more depth and emphasis. The game's depiction of a Forge World at war is brilliantly atmospheric, conveyed by the excellent architectural design and the high quality of the graphics. The writing is surprisingly good for a linear combat game, with an interesting subplot developing about dissent in the Ultramarines' ranks (which builds to the morally ambiguous conclusion to the game). Secondary characters are fleshed-out well, and the game designers are to be commended for avoiding cliche with the game's only female character of note, Lt. Mira. Even the (initial) principal villain, the Ork Warboss, is surprisingly badass and at one stage even (very briefly) sympathetic.

Elsewhere the game is more predictable, especially if you are familiar with the WH40K setting in general and Relic's Dawn of War strategy games in particular. The 'unexpected' arrival of a third faction in the late-game period, the unveiling of a core character as a traitor and other plot twists are signposted well in advance. Still, for a basic action game, the plot and characters are a cut above average. 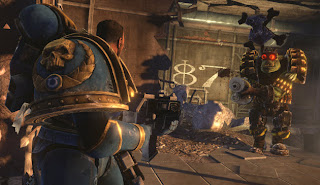 Combat is satisfyingly chunky, with the Space Marines' arsenal feeling suitably overpowered. There's also a nice burst of originality in doing tiresome 'turret' missions only to find you can rip the weapon off the turret and walk around with it as a normal (but massive) gun until it runs out of ammo. The hordes of attacking Orks are depicted well and the game manages to strike the right balance between being too much of a pushover and too difficult to be enjoyable. Whilst the game rewards you charging straight into the midst of a horde of 20 Orks, it also punishes you if you do so without being fully aware of the situation and eliminating bigger threats first. In particular, keep an eye open for suicide squigs (animals with explosives strapped to them) which have a tendency to charge up to you and explode whilst you are distracted in melee.

The game breaks up the numerous large-scale battle scenes with set-piece events, such as sitting on the back of a train blazing away at an attacking Ork battlewagon (which seems to conflate two Firefly references into one, with this particular Ork ship strongly resembling a Reaver warship). These are surprisingly infrequent, with the game preferring to mix up combat scenes with 'tense' sequences of exploring areas and expecting an ambush. In practice these 'tense' sequences are a little bit too common, making it feel that a good quarter or so of the game is spent running through empty rooms, some of them splendidly suitable for a good firefight, only for nothing to happen. The limited interactiveness of the game - aside from shooting or hitting things or stocking up on ammo, the only thing you can do is listen to some logs lying around the place - makes the between-firefight sections feel a bit pointless and monotonous. Unfortunately, just as I was getting ready to praise the game for the total absence of tiresome Quick-Time Events, the game decided to end on a rather annoying one (albeit one amusingly based on an event in the Lord of the Rings movies), which felt random and out-of-keeping with the rest of the game.

Space Marine's game engine is impressive, handling the numbers of enemy opponents, ludicrous amounts of mayhem and the vast levels with ease. In fact, the engine is impressive enough that I'd love to see Relic doing more with it: adding more interactiveness or maybe even producing a WH40K role-playing game using the same assets would be an interesting move.

Overall, Space Marine (****) is a fun, playable shooter. It's on the short side at six hours, but it also doesn't outstay its welcome, cleverly adjusting the plot twists and turns to keep things as fresh as possible given the limitations of the genre, though the shoot-'n'-slice gameplay does start to feel a bit same-old towards the end. I'd hesitate to recommend it at full price, but on rental or budget, it is a solid and enjoyable slice of entertainment. The game is available now in the UK (PC, 360, PS3) and USA (PC, 360, PS3).
Posted by Adam Whitehead at 13:16

Being a fan of the WH40k universe, but not a fan of RTs games, this game was so satisfying for me. It doesn't do anything truly special, but you do really feel like a Space Marine. Hoping for a sequel! Or, like you said, for them to do some other things with the same assests. The possibilities are nearly endless.

Played 30 minutes of this on onlive and quite enjoyed it. If its only 6 hours long I think ill fork out for a day pass someday i'm bored.

I'm currently stuck with the final boss fight, which annoys me more than I can say. The rest of the game, with some exceptions (getting stuck on invisible edges! Argh!) was really enjoyable. The story and characters are really above average, and I'm still drowning in gratitude for Relic that they didn't implement a stupid romance with Lt. Mira or tried to soften up the authoritarian dictatorship that this imperium of man poses.
In contrast to you, Adam, I liked the empty sections well. They seemed to fit real nicely and everything, and I enjoyed them.