1715, the West Indies. The feared pirate Captain Flint captures a cargo ship and recruits one of its surviving crewmembers, John Silver, as a cook. The way of life for the pirates, operating out of the port of Nassau, is threatened by British imperial ambitions in the region and the growing power of the American colonies to the north. Flint hits on an ambitious plan to enrich himself and his crew forever, and to give the governess of Nassau, Eleanor Guthrie, the means by which to give the island and the city its freedom. But his plan is dangerous and reckless, and many on both the island and his own crew plot to stop him from endangering them all. 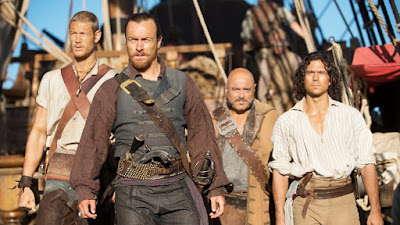 Black Sails is a four-season show airing on the Starz network in the USA from 2014 to 2017. It was part of the post-Game of Thrones new wave of "Golden Age of Television" dramas, readily identifiable by a veritable overload of sex in the first season, although the show does calm down and starts exploring the characters and storylines in more detail and becomes a much more compelling character drama.

Season 1 sets up the basic premise: the series is based on the island of New Providence in the Bahamas. The port of Nassau stands as a base of operations for multiple pirate crews, most notably the Walrus under Captain Flint and the Ranger under Captain Charles Vane. The pirates' way of life is profitable but fragile; Nassau was a British colony that's descended into lawlessness and the pirates fear the return of the British in force. Eleanor Guthrie rules Nassau as governess, but her authority is fragile and reliant on the cooperation of the crews, something that has been less certain since she broke off a relationship with Captain Vane. Captain Flint proposes a grand endeavour, the capture of the largest Spanish treasure galleon afloat with enough money to make every crewmember in the attempt rich and to help secure Nassau's future independence. However, Flint's methods of maintaining secrecy (including killing those whom he believes are security risks) alienates several key members of his crew, who plot a mutiny, whilst Eleanor's authority is tested by both her father (who helps sell the pirates ill-gotten gains in the American colonies, where fewer questions are asked) and various interlopers.

The first season tells a multitude of stories simultaneously: Flint's efforts to seize the Spanish galleon and keep his command (and head); John Silver ingratiating himself with the crew of the Walrus; William "Billy Bones" Manderly fighting a battle between his personal loyalty to Flint and his responsibility to the Walrus crew; Vane's attempts to win back Eleanor and build himself a power base; Eleanor's attempts to maintain order and her authority in Nassau; Jack Rackham's attempts to secure himself and his lover a future on the island when their initial fortunes turn sour; the fortunes of a prostitute named Max as she attempts to win herself greater power and authority; and the attempts by former slave turned freeman Mr. Scott to protect his employer Eleanor, sometimes from her own worst instincts. There's a lot going on in the first season of Black Sails and this works to the show's benefit.The writing is good enough to balance the different storylines and characters out and allows the stories to all move forwards at a fair old clip. Even in this Era of Binge, Black Sails is more bingeable than most shows, delivering a plethora of splendid character stories, larger geo-political concerns and occasional soap opera-ish elements that makes it a compelling drama.

The cast is exceptional, especially Toby Stephens as the determined but perhaps overly-paranoid Captain Flint and Luke Arnold as the young and callow "Long" John Silver (whom we know is destined for infamy, but at this point is an overconfident and callow youth). Also superb as Tom Hopper as Billy Bones, Jessica Parker Kennedy as Max and Hannah New as Eleanor Guthrie, with Zach McGowan putting in an appropriately steely performance as Charles Vane and Hakeem Kae-Kazim providing substantial gravitas as Mr. Scott. There isn't a weak link in the cast.

In terms of the history, the show isn't trying to be a docudrama but it does illustrate and complicate some of the cliches about the Golden Age of Piracy. It shows captains ruling their crews mostly through agreement, with votes being held on key decisions. The depiction of pirate captains as tyrants is illogical (since crews would simply kill a tyrannical captain or leave the ship the next time they hit port) and the show does a great job of showing the tricky balancing act captains had in maintaining their authority. There's also a good depiction of how a complex balance of power exists between Britain, France, Spain, Portugal and their colonies in the New World, with the pirates caught in the middle and only existing because these powers have not been able to divert enough resources to stamp them out altogether. The show delves into a number of other themes, like the role of women in pirate society (including the depiction of real historical figures like Anne Bonny) and the transatlantic slave trade (with the last couple of episodes of the first season going into the issue in some detail).

Black Sails does have a few weaknesses in its first season. There's a few under-explored character beats which makes understanding the motivations of key characters a bit more difficult than it should be, particularly of Flint (extensive flashbacks in Season 2 do resolve these issues, however). Budgetary considerations means a lot more action happens on land then perhaps you'd expect in a pirate drama, although when the shot does start flying and the cutlasses clashing, no expense is spared. The CGI used for major sea battles can be a bit variable (players of Empire: Total War may experience some flashbacks) but for the most part is very impressive. Some may also find the prevalence of female nudity a bit tiresome, but as the show retreats from its initial "Game of Thrones meets Master and Commander" setup (favouring the latter more than the former, admirably) and forges its own identity, that also becomes less of a problem.

Season 1 of Black Sails (****½) hits a few minor problems on its way out of drydock, but otherwise is an excellent, enjoyable and addictive drama. It is available to watch in the UK via Amazon Prime and in the USA via Starz.
Posted by Adam Whitehead at 15:30