Today marks the thirtieth anniversary of one of the most successful video games of all time, Lemmings. 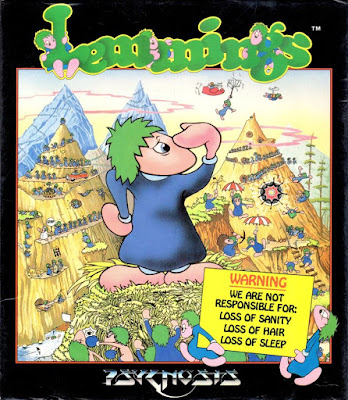 Most people got their first chance to play Lemmings when a three-level demo of the game was attached to Amiga Format magazine for their Christmas 1990 issue. The response to the demo was enormous, inspiring the publisher, Psygnosis, to rush out a more substantial, paid demo of the game a few weeks later. People were so excited by the game that, on its release on Valentine's Day 1991, it immediately blew the top off the sales charts.
The game was subsequently ported to almost every single gaming format that can be thought of, including modern mobile platforms. Highly conservative figures suggest that at least 20 million copies of Lemmings have been sold, but the true figure is likely enormously higher.
Lemmings was developed by DMA Design, based in Dundee, Scotland. The game was inspired by an animation put together by artist Mike Dailly on Deluxe Paint 3, showing a small, pixelated figure walking with impressive fluidity. Designers Russell Kay and David Jones fleshed out the idea to have a huge number of these figures who would constantly walk without stopping, unless made to, even if meant their deaths. The behaviour was reminiscent of the (mostly apocryphal) idea that lemmings will keep walking even if it means drowning.
The game design came together quite quickly. Each level opens with a trapdoor in the sky opening and a stream of lemmings issuing forth to a cry of "Let's go!"; the number of lemmings and the frequency of their arrival varies according to the level. The lemmings then walk until they can walk no more, at which point they turn around or die. The player can give lemmings certain jobs, such as building bridges, digging through the ground, parachuting (which allows them to survive falls that are ordinarily fatal), blocking (causing other lemmings to retreat) or, in extreme cases, exploding. A common tactic is to separate several lemmings from the pack, block the others into a safe area, and then have the other lemmings explore ahead of the horde, building the route needed to guide the pack to safety. Some maps feature elaborate traps, metal ground (which can't be dug through) and other complications. The simplicity of the gameplay rapidly escalates into elaborate, torturously-designed levels that have players tearing their hair out in frustration.
Lemmings was succeeded by an expansion, Oh No! More Lemmings (1991) and multiple sequels: Lemmings 2: The Tribes (1993), All New World of Lemmings (1994), 3D Lemmings (1995) and Lemmings Revolution (2000). Surprisingly, the game has not seen a new title in more than twenty years, or even a high-quality remaster.
The reason for that might be because the developers got sidetracked by another project: the immense success of Lemmings gave them the financial resources required to make a series of ambitious games such as Hired Guns and Walker, and also a game about cops and robbers called Race 'n' Chase. A thorough redesign later, this game was finally released in 1997 under the title Grand Theft Auto, and DMA Design scored a hit to rival Lemmings. Rebranded Rockstar North, the studio went on to develop several of the biggest-selling video games of all time, including Grand Theft Auto V (2013) and Red Dead Redemption 2 (2018). Maybe they'll get back to the green-haired guys one day.
Lemmings also had celebrity fans: fantasy author Terry Pratchett lost such a titanic amount of productivity to the game that he deleted it from his computer's hard drive and destroyed the floppy disks, and wrote a reference to the game into his novel Interesting Times (1994), in which a golem army is controlled through an identical interface to the game.
Posted by Adam Whitehead at 19:50

There were a few recent releases in the series, all from Sony who have been the rights holder since they acquired Psygnosis in 1993.

There was the 2006 Lemmings for PSP/PS2/PS3 by Team 17, which is mostly a remake of the original with modern graphics.
In 2012, there was a version for the PlayStation Mobile service, and in 2014 there was Lemmings Touch for PS Vita.
The most recent one is a mobile game (Android/iOS) from 2018, unfortunately plagued with free-to-play aka pay-to-win mechanics.