Bean and her companions are "guests" of Queen Dagmer, whilst a low-key coup has seen Dreamland's increasingly deranged King Zøg deposed in favour of his son and the conniving Prime Minister and Archdruidess. Whilst Bean tries to free herself and help her father, she also becomes aware of a new threat to the kingdom arising from Steamland. 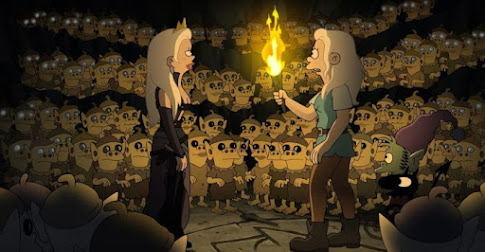 It's been a bumpy road for Disenchantment, the third animated series from Matt Groening, the creator of The Simpsons and Futurama. The first part* was all over the place, but settled down towards the end of its run, which was followed by a stronger and more promising second part. The third part, it was hoped, would build on this success further.

Alas, those hopes were in vain. Quality control in the third part of Disenchantment has plummeted off a cliff, resulting in a weak and ill-conceived run of episodes which might have at least started tapping the nail into the show's coffin.

The faults with this part are almost too numerous to list, but the biggest sin is the sidelining of King Zøg by making him go mad. John DiMaggio is probably the vocal highlight of the show's very talented cast, as he was on Futurama (where he voiced the robot Bender) so reducing his role on the series to honking like a goose and removing almost all of his comedic ability is a really weird move. The show occasionally veers towards using the character arc (if that's not being too generous) to say something about mental health, but never really does, more often using Zøg's decline as a source of cheap laughs. Only at the very end of the part, when he finds a way of communicating with Bean briefly, does DiMaggio get to stretch his acting chops for a moving but all-too-quickly-abandoned storyline.

The rest of the part suffers from awful pacing, never knowing when to let a misfiring joke or character move on, a clear difference from Groening's earlier shows which were much more disciplined and quickfire in their comedy. This extends to the individual episodes, which I think now should 100% have been hard-capped at the 22 minutes traditional to most US animated series. At 30+ minutes, almost every single episode is flabby and overlong. There's also a growing reliance on stock comic characters and running gags, which for a show in its sixth or seventh season is a bad sign, but in just its second/third* is much more concerning.

The voice actors do their best, but the material is very thin gruel indeed. Luci is sidetracked and has nothing to do for most of the part (a storyline where he is supplanted by a talking cat has some potential but is wasted); Elfo is given some additional development which sees him moving on from his crush on Bean, only to have it resurrected when it was beyond tiresome in the first episode of the series. Other characters suffer from unclear motivations: what is Odval about, does he want to betray Zøg and rule the kingdom or not? Any given episode gives dramatically varying answers to this question.

There are a few exceptions to the downward spiral of the season. Matt Berry's vocal gesticulations can elevate even the most awful material and he heroically saves a Merkimer-centric episode almost single-handedly. Richard Ayoade also helps elevate a new character in the Steamland episodes, but he's not as adept at handling the really ripe lines.

The best episode is a quieter one where Bean falls in love with a mermaid (becoming the first canonically bisexual major character in a Groening show in the process) and there's time for some character reflection, something the show can do quite well when it's not trying to hammer through some awkward laughs based on outdated tropes.

Overall though, the third part of Disenchantment (**½) is a major disappointment, throwing away the progress made to date for a season that's very rarely funny and rarely raises its game above the boring. The shoots of green are very, very widely spaced-apart here. The season is available worldwide on Netflix now.

* Slightly tiresomely, Netflix is commissioning this series in 20-episode seasons which are then released as 10-episode half-seasons, known as "parts". So "Part 3" is in fact the first half of Season 2. Don't moan at me about this, moan at Netflix.