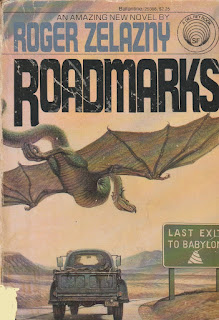 Kalinda Vazquez (Star Trek: Discovery, Fear the Walking Dead, Once Upon a Time) will be the main showrunner on the project, as well as a writer and executive producer. Vince Gerardis, a producer on Game of Thrones and House of the Dragon, will also produce the project.

The project was brought to HBO's attention by George R.R. Martin as part of his long-term development deal with the network, which has also resulted in the long-gestating Who Fears Death, based on Nnedi Okorafor's novel, and Game of Thrones spin-offs The Longest Night (aka Bloodmoon, which was cancelled after an unsuccessful pilot) and House of the Dragon, which starts shooting imminently. Martin will be listed as a producer on the project but will not be writing or involved day-to-day.

Zelazny was a friend and mentor of Martin's, working with him on the long-running Wild Cards superhero anthology series and on a TV adaptation of Zelazny's "The Last Defender of Camelot" for the rebooted Twilight Zone in the 1980s. Zelazny passed away in 1995.

Roadmarks is about a transdimensional highway that extends through time and space, allowing people to travel to other places and other times. It was created by a race of dragons for reasons that are initially unclear. The novel is notable for its structure, which incorporates a linear story and a non-linear sequence of events that unfold in tandem.

HBO, notoriously, only has a limited slate for developing original projects compared to other streamers and cable networks, but is expanding its development profile with a view to having some projects on HBO and others as originals for HBO Max. It's unclear what category Roadmarks will fall into. This is only a development process, not a formal greenlight at present.

I'm not watching/reading/buying anything GRRM does until The Winds of Winter. Finish the series, stop with these distracting side quests.

love the Game of Thrones series. Will be looking forward to Roadworks by Zelazny. Have a number of his books.

Roger Zelanzy would my cast imagination into realms unknown alongside all the old masters of SF and fantasy. Back in my wondering days of curiosity, my possessions consisted of a guitar and a ValPack full of books. Quite a few were Roger's. So crossing my fingers that ROADMARKS survives the journey.

This is one of the few SF books I've read and thought- 'they should make a movie with the hero turned into a black guy'. Red Dorrakeen would be a great Will Smith role.

So they probably make him gay and lose everything but the title.