Fifteen years have passed since the end of the Red Ship War. FitzChivalry Farseer is believed dead, with only a few knowing the truth that he survived and helped end the war and the threat of the cruel King Regal. Living a comfortable life as a smallholder with his wolf Nighteyes and an adopted son, Hap, Fitz occasionally has strange dreams. He dismisses these, until his old friend the Fool visits with news: Prince Dutiful, the son of Queen Kettricken and the late King Verity, has vanished in a very strange manner. Reluctantly, Fitz returns to Buckkeep and a life he thought he'd left behind. 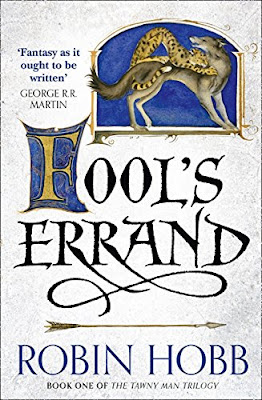 Fool's Errand is the fourth novel featuring the adventures of FitzChivalry Farseer, picking up after the events of the original Farseer Trilogy. It's also the seventh novel overall in the Realm of the Elderlings setting, which now extends across sixteen books. It's a bit of a fresh start in the series, as although it follows up on events in the Farseer books (and a brief mention is made of the Liveship Traders trilogy), it also introduces new characters and new storylines.

Fool's Errand is a slow book, at least to start with. The first 200 pages - more than a third of the novel - are taken up by Fitz's home life and routine, with lengthy ruminations on chicken-farming. Fitz's main concern isn't war, death or assassinations, but instead raising enough coin to find his adopted son a good apprenticeship. Some may find this sequence interminable, but Hobb uses this sequence to establish Fitz's good, comfortable and quiet life away from the mayhem of the court, and what it means when it is taken away when a new crisis erupts.

The rest of the novel is more familiar: a prince has gone missing, the Witted people of the Six Duchies are rebelling against the persecution and murder of their kind by forming an armed resistance and a new peace treaty between the Duchies and the Outislands is in jeopardy. Keen for people to not realise he's survived, Fitz adopts a new identity (the uncouth Tom Badgerlock) and undertakes clandestine mission for the crown. This results in some splendid, classic epic fantasy elements such as an awkward cliffside sword fight against superior enemy numbers, the experimental use of magic and the gradual teasing and unravelling of a labyrinthine conspiracy.

This doesn't mean that Hobb's straying too far from her established tropes. When in doubt about what to do next, she just makes Fitz's life more miserable and horrible than ever before, killing off loved ones and finding ways to put him in as awkward and painful a situation as possible. It's all vaguely depressing, which is an odd juxtaposition given that the second half of the novel is as lively and swashbuckling as Hobb has ever gotten.

Still, if you're in the mood for a beautifully-written, somewhat melancholy fantasy where the focus is firmly on the characters rather than magic or battles, Fool's Errand (****) is a very fine novel. It's also surprisingly stand-alone: you'd definitely miss a fair amount if you hadn't read the Farseer trilogy, but the plot is focused on a new story and situation. Also, whilst the story clearly is set to continue after the final page, there's no major cliffhanger ending. The novel is available now in the UK and USA.
Posted by Adam Whitehead at 16:56