Captain Sam Vimes of the Ankh-Morpork City Watch is getting married. It's an occasion of great happiness and joy, marred by a massive explosion at the Assassins' Guild and the theft of an unknown artefact. The Guilds don't want the Watch involved and the Patrician doesn't want Vimes involved, but bodies are soon piling up. Someone out there has a weapon that kill people instantly at a long, long range and its up to the City Watch and their new intake to stop them. Somehow. 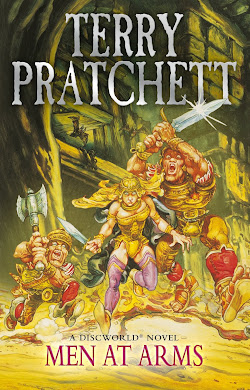 When Terry Pratchett introduced the City Watch in the classic Discworld novel Guards! Guards! it always felt like he was deliberately setting up a premise and cast of characters who could go on to recur regularly through the series. It's a bit surprising that it took him seven novels to get back to the Watch and their adventures, but when he did, he did it with style.

Once again, Pratchett engages with amusing cliches - Captain Vimes is only three days from retirement and we all know what that means in a police procedural - and once again also undercuts a simple satire with some outstanding character and story depth. There's a harder edge to this story than most Discworld novels, with a somewhat higher body count (including among some of the sympathetic protagonists), all arranged around a genuinely intriguing mystery. There's a great nod to hardbitten detective stories, with Sam Vimes as the cynical, weathered old cop doggedly pursuing the case in the face of opposition, with Corporal Carrot as his enthusiastic young sidekick. As you'd expect, though, Pratchett subverts this setup early on and takes the story in more interesting directions.

The novel benefits from being the first one written with Stephen Briggs' Streets of Ankh-Morpork guidebook to hand, meaning that Pratchett could plot things like rooftop chases and the routes of various characters on a big map of the city. This immediately gives the city more of a lived-in feel. But the writing is far more important in giving Ankh-Morpork a lived-in reality to it. Previous to Men at Arms, Ankh-Morpork was simply a great setting. From this novel onwards - and to this very day - it simply became the greatest metropolis ever presented in a fantasy series, a city that absolutely convinces from the tip of the Tower of Art to the depths of the sluggish River Ankh and from the office of the Patrician to the lowliest criminals on the streets. For the backdrop to an ostensibly comedic series, that's quite an accomplishment.

On top of this, Pratchett brings a rich level of characterisation. Both Vimes and Carrot take a step up, and the troll-and-dwarf pairing of Detritus (returning from Moving Pictures, as does Gaspode) and Cuddy is absolutely fantastic. Angua is also a very fine addition to the cast. Pratchett also uses the novel to intelligently investigate ethnic tensions in a divided city as well as political intrigue between the guilds and the government, as well as analysing the dangers of those who live in the "glories" of the past rather than trying to help the present.

Pratchett also still brings the funny. As usual there is intelligent wordplay, some smart references (Detritus's swift promotion to a Full Metal Jacket-style drill sergeant is as terrifying as it is funny) and, when called for, some more straightforward gags peppered through the book.

The real success of Men at Arms (*****) is Pratchett taking things he'd previously been good at in isolation and here combining them into an outstandingly successful combination, furthering the run of the Discworld series' first "imperial period" of quality. The novel is available in the UK and USA and I previously reviewed it here.