Iain M. Banks's Culture universe is one of the most accomplished in all of science fiction and fantasy, and is now getting two companion volumes. 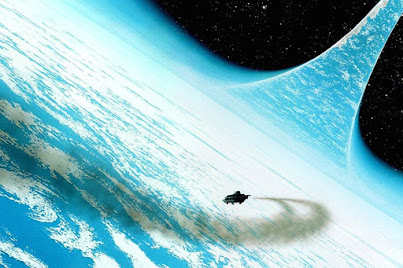 Iain Banks wrote copious notes for the setting, along with his own illustrations of spacecraft, people, places and hardware. Orbit Books, in collaboration with Banks's close friend and colleague Ken MacLeod, is to now present this material in two volumes. The first is entitled The Culture: The Drawings and will focus on Banks's illustrations. The second, presumably The Culture: The Notes, will be a companion guide to the series drawing on Banks's own background material and information for the setting.
The two new books replace what was originally one project, The Culture: Notes & Drawings, once it was realised the material was too large to fit comfortably into one book.
The Culture novels are Consider Phlebas (1987), The Player of Games (1990), Use of Weapons (1991), Excession (1996), Inversions (1998), Look to Windward (2000), Matter (2008), Surface Detail (2010) and The Hydrogen Sonata (2012). Iain Banks passed away in 2013.
Posted by Adam Whitehead at 13:06

That's some bittersweet news, Adam. I recently re-read all the novels (and The State of the Art) and was pining for some new Banks content.
Do you think that the release of this material is related to to falling through of the Amazon deal?

Disappointing as it'll mean an even longer wait. Still, i will definitely try and get a copy of both.