GOOD OMENS renewed for a second season at Amazon

In somewhat surprising news, Amazon Prime Television has renewed Good Omens for a second season, despite the first season adapting the novel in its entirety. 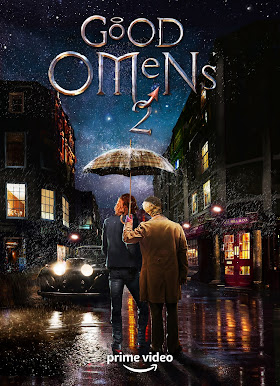 Neil Gaiman and Terry Pratchett co-wrote the original novel for publication in 1990. However, even before the book hit shelves they sat down and mapped out a potential sequel, producing an outline. Their subsequent stratospheric career trajectories made it impossible for them to write the book, despite periodically hoping to look at the project again. The second season of Good Omens sounds like it will draw upon this material for inspiration.

Neil Gaiman will again produce, co-showrun and co-write the series, this time alongside John Finnemore. Gaiman confirmed the show is already in pre-production with sets being built, and will shoot in Scotland. David Tennant and Michael Sheen will reprise their starring roles.

Season 2 of Good Omens will shoot later this year for a 2022-23 debut on Amazon.