Bethesda and Microsoft have lifted the lid - at least a bit - on their new forthcoming CRPG, Starfield.

The game is notable for being Bethesda Game Studios' first new IP since the first Elder Scrolls game, Arena, in 1994 (they inherited Fallout from another company, Interplay), and their first game to be released since they were acquired by Microsoft last year.

Like their previous single-player games, Fallout 4 (2015) and The Elder Scrolls V: Skyrim (2011), Starfield appears to be an open-world game giving the player the choice on where to go and what to do, to follow a central narrative or ignore it as they see fit, in favour of side-missions or exploration.

The game pits the player as an explorer, part of a group called Constellation, with a fully-customisable spacecraft and capable of flying between different planets.The video only showcased one wild, unkempt planet environment, but concept art suggested multiple planets, including a lush jungle world, subterranean caves, factories, a low-tech outpost, a settlement on stilts located in the ocean and a huge, technological-looking city. The game takes a somewhat low-tech approach but Bethesda claim to want to present a more optimistic view of the future, rooted in our shared humanity, compared to the more dystopian vision presented in Fallout. 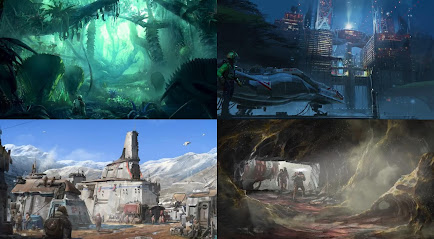 The game utilises the "Creation Engine 2," a significant revamp of the technology used to power Skyrim, Fallout 4 and Fallout 76. The trailer was rendered in-engine, suggesting a hefty improvement to visual fidelity over their previous games and the ability to use ladders (a lack fans have mocked Bethesda over for years).

Starfield will be console-exclusive to Xbox Series X/S and will also release on PC via Steam and Xbox Game Pass. The title is scheduled for release on 11 November 2022.