Captain Sam Vimes of the Ankh-Morpork City Watch is retiring and getting married in a few days. But an explosion at the Assassins' Guild attracts his interest, and soon a trail of bodies is forming. The Guilds don't want his help, the Patrician has ordered him to lay off and his fellow Watch members seem more concerned about the new intake of ethnic minorities (Lance-Corporal Cuddy of the dwarfs and Lance-Corporal Detritus of the trolls) than the mystery. But somewhere in Ankh-Morpork a killer is on the loose with a very powerful new weapon... 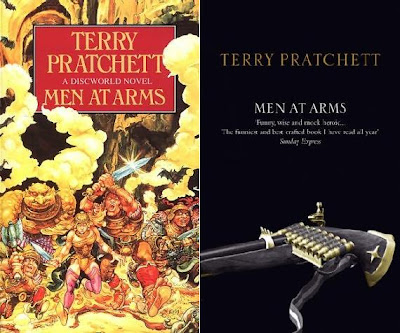 Men at Arms is the second Discworld novel to focus on the City Watch, introduced in the classic Guards! Guards! As told in that volume, the City Watch saved the city from a marauding dragon and at the end of the book the Watch gained fresh resources from a grateful city government. However, it is still regarded as a joke, as Men at Arms makes clear.

Pratchett once again uses the cliches and ideas of police procedurals to generate humour and satire, although this volume is much more of a hard-bitten (in some cases, literally) mystery novel. Sam Vimes is portrayed as the cynical, weathered old cop doggedly pursuing his case in the face of all opposition, whilst Corporal Carrot is his enthusiastic young sidekick. Of course, that would be a bit too cheesy, so Pratchett subverts this idea earlier on and takes the story in a more interesting and original direction.

The city of Ankh-Morpork comes to life in this book more successfully than in any prior volume, to the extent that Pratchett's playwright and friend Stephen Briggs was able to use information in this book (and the prior ones) to map the city so everything tracked and made sense (the results can be found in the spin-off product, The Streets of Ankh-Morpork). The city's ethnic make-up, the political structure of the guilds and the office of the Patrician are all portrayed convincingly. In addition, Pratchett aims high with his characterisation, with the most affecting death of a Discworld character to date and some brilliant development for Carrot and Vimes. There is even a reasonably well-portrayed romance and some (tastefully off-screen) sex, a first for the series. Men at Arms is Discworld aimed at a slightly maturer level than arguably any of the previous books bar Small Gods. 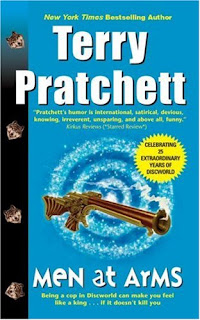 Which isn't to say that Pratchett doesn't bring the funny. The Colon/Nobbs double-act is excellent, the return of Gaspode the Wonder Dog (from Moving Pictures, but much better-utilised here) is genuinely funny and there is some fantastic material to be mined from the Cuddy/Detritus relationship.

Men at Arms (*****) is Pratchett yet again firing on all cylinders, delivering a novel that is by turns brilliantly funny, genuinely thought-provoking and consistently entertaining. The novel is available now in the UK and USA.
Posted by Adam Whitehead at 18:11