As mentioned in the previous review, Red Dwarf abruptly went off the air following transmission of its sixth season at the end of 1993. A criminal case involving actor Craig Charles and the breakdown of the working relationship between writer-producers Rob Grant and Doug Naylor proved disastrous, and although both problems were eventually overcome (Charles was fully exonerated; Rob Grant departed to become a novelist leaving Naylor in charge) it took a long time to sort it all out. 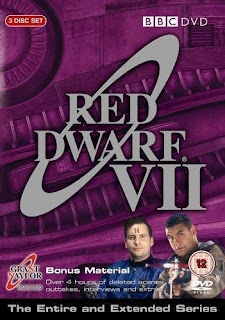 Other problems also seemed to conspire against Red Dwarf's return. As of the sixth season, Red Dwarf was pretty much the sole reason for the continued existence of the BBC's special effects and miniatures department, and with the show on indefinite hiatus the department was closed down, meaning that future special effects requirements would have to be handled by private firms and thus on a far more expensive basis. Actor Chris Barrie had also gone on to enjoy even greater success as the title character in BBC-1 sitcom The Brittas Empire, which was a much simpler and faster show to shoot than Dwarf. As a result, he decided not to appear in Red Dwarf on a full-time basis in the next series. Possibly even a bigger change was the removal of the studio audience, with the show now being fully pre-recorded and only the tape being shown to a studio audience later on. This clearly throws off the rhythms of the actors in the show, with some lines obscured by audience laughter and a few out-of-place pauses for laughs that weren't as big as was hoped for.

Despite these problems, the show's ultimate return was not in doubt. It was BBC-2's single highest-rated TV programme, it was one of the biggest-selling BBC series on video (of any kind) in the 1990s and during the years it was off the air the BBC received numerous enquiries as to when the show would return.

Season VII aired on BBC-2 in early 1997 and it was immediately clear that this was a different show to what had come before. Chris Barrie's character of Rimmer departed in the second episode, though he appeared in several further episodes in brief flashbacks or cameos. Despite a higher budget, the show also struggled with its special effects requirements, with very primitive CGI and some seriously shoddy model work replacing the very accomplished miniature filming and digital effects of Seasons 5-6.

To help secure funding for the long-planned Red Dwarf movie (the prospective backers for which had asked for a major female character to be added to the roster), Naylor decided to add the character of Kristine Kochanksi to the crew on a full-time basis. Kochanski had appeared in several previous episodes in Seasons 1, 2 and 6 played by Clare Grogan, but with Grogan unavailable the role was recast with Chloe Annett. This move wasn't initially popular with the fans, as Annett's previous role had been in the quite spectacularly awful Crime Traveller, but Annett actually turned in a good performance and eventually won over many of the fanbase.

With all of these behind-the-scenes changes it is perhaps inevitable that the quality of the scripts suffered quite badly. Season VII isn't quite the unwatchable pile of cack some hardcore fans describe it as, but it clearly hasn't had the same care and attention paid to the writing as in previous seasons. The extremely rapid dismissal of the Season VI cliffhanger is a little disappointing, but the completely nonsensical technobabble reasons given to explain why Starbug is now many times its former size are very strange indeed. That said, the rest of the opener, Tikka to Ride, in which the Red Dwarf crew inadvertently change history when they travel to Dallas in November 1963, actually has quite a clever premise and a strangely affecting conclusion. It also just about manages to fall on the right side of good taste.

The second episode, Stoke Me a Clipper, is a bit of a disaster. A James Bond-style opening sequence featuring Ace Rimmer sky-surfing on the back of a crocodile is quite entertaining, but the rest of the episode is weak, illogical, badly contrived and deeply unfunny. The third episode, Ouroboros, re-introduces Kochanksi (or rather, a version of Kochanski from an alternate reality) and sees Lister's ex-wife (from Emohawk) showing up again. It's a little bit funnier, but still not up to the standards we expect from the show. Duct Soup, a 'bottle' show set in Starbug's flooded engineering decks, is probably the highlight of the season with some good dialogue and a few good laughs reminiscent of earlier seasons. Blue, in which Lister realises that he misses Rimmer, is also quite amusing as Kryten sets out to remind him precisely what Rimmer was like.

Beyond a Joke starts with a great sequence in which Kryten, annoyed with the crew for missing supper due to being in a VR 'Jane Austen World' simulation, invades the simulation in a Russian T-73 tank and kills everyone (resulting in the largest explosion ever filmed for the series, due to over-eager army demolitions experts who were fans of the show trying to impress the actors). After this it nosedives into the ground with a lot of guff about 'nega-drives', more rogue simulants, more GELFs and a second 4000 series mechanoid who isn't very funny. Epideme has a good premise - a sentient virus that chats to its host whilst it tries to kill him - but the virus has a very annoying voice and the script doesn't really go anywhere after establishing the initial idea.

Nanarchy, the Season VII finale, finally has the crew locating Red Dwarf and learning what happened to the ship when it disappeared. It's a mixed bag of an explanation, being amusing and SF-oriented, dealing with the hitherto unexplored-on-the-show science of nanotechnology, but it's also reliant on the idea that Kryten, a robot whom we have been reminded many times as having being built for the express purpose of cleaning lavatories and was extremely cheap, also had inside him billions of nanobots capable of rearranging atoms. It doesn't really make any sense. Anyway, there's another cliffhanger ending, the return of Holly (the original, played by Norman Lovett) and overall it's a decent enough ending to the season.

The seventh season is a mixed bag, it has to be said. The visual effects and writing are radically inferior to what has come before, although the acting (from both the regulars and guest stars such as Brian Cox) remains strong. The addition of Kochanski to the cast also works surprisingly well, somewhat better than I think most people were expecting at the time. At the same time, this season was also made with significant background problems, and in that context it could have turned out worse. The biggest problem, and one that was unavoidable, is that the series really hurts without Rimmer as part of the mix. Luckily, Chris Barrier had such a blast filming this season that he agreed to return full-time for the eighth, which contributed to that season's somewhat higher quality.