Imp y Celyn, trained as a musician in a druid society, arrives in Ankh-Morpork ready to seek his fortune. Instead, the city rapidly deprives him of the few riches he already has. Teaming up with the dwarf horn-blower Glod and the troll drummer Lias, Imp braves the wrath of the Musicians' Guild by playing without a licence. When he acquires a special guitar from a back-alley shop, Imp learns that he and his band are meant for greatness, for sex and drugs and Music With Rocks In (well, one out of three isn't that bad). 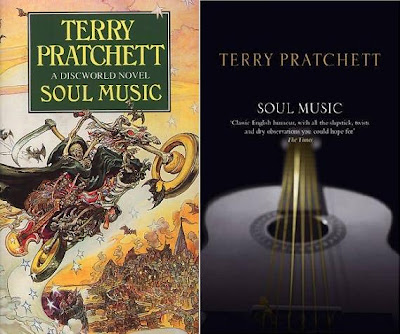 Meanwhile, Susan, the daughter of the Duke and Duchess of Sto Helit, is rather perturbed to learn that she is the granddaughter of Death, and when her grandfather decides to take some time off she has to step in and do the job. Which would be fine except that when it becomes time for her to collect the soul of a certain musician, she learns that music doesn't want him to die. At least, not until it decides the time is right...

Soul Music is the Discworld's take on rock music, essentially doing for music what Moving Pictures did for movies. In fact, Pratchett lampshades this a couple of times, with references to the events of that earlier book informing events (such as Ridcully becoming convinced horrible Things from the Dungeon Dimensions are about to break through the walls of reality at any second). The problem is that whilst he does this amusingly, Pratchett never really breaks away from the basic concept. He throws some great new ideas and characters into the mix, with the introduction of HEX (the Discworld's first AI-based computer), the Duck Man and the excellent character of Susan, who recurs in several future books, but overall it does feel like Pratchett is retreading old ground here. The Death storyline is also somewhat under-developed, with no real reason for Death suddenly taking a few weeks off being given. In fact, it feels very odd he would after the chaos this caused last time in Reaper Man (the events of which are also referenced several times, making Soul Music one of the most continuity-heavy books in the series). 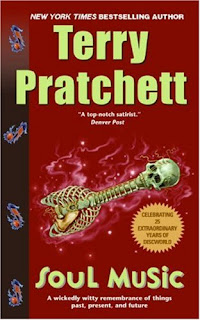 Of course, as has been said in these reviews before, Pratchett on autopilot is still better than most writers at the very top of their game. Pratchett has a huge knowledge of music and lets the reader know it with references (both overt and subtle) to Buddy Holly, Elvis, the Beatles, the Stones, the Who, Meat Loaf, punk rock and The Blues Brothers roaring past the reader like bullets from a machine gun. The pace is fast, the narrative is tight and some of the cliches of rock 'n' roll are very cleverly used to set up and further the storyline.

The problem is that Soul Music is, whilst entertaining, lacks the spark of greatness that infused the three books that preceded it, and if read in close conjunction with the earlier volumes it does feel like a slight step down in quality. The new characters are not quite as memorable as those in the books which preceded it and the running gag with the Bursar's insanity and dried frog pills is starting to wear pretty thin by this point. Pratchett also has a slight problem with the cameos from the Ankh-Morpork City Watch, who in their own books get involved whenever something crazy happens in the city and eventually sort it out, but in other characters' volumes simply come across as useless and somewhat pointless, which seems a bit disrespectful of them after their fine achievements in Men at Arms.

Still, these are really minor problem. Soul Music (****) remains a very entertaining and readable novel, and is available now in the UK and USA. An animated movie based on the book is also available in the USA (in a double-pack with Wyrd Sisters) on DVD, although it is currently out-of-print in the UK.
Posted by Adam Whitehead at 19:55

It seems likely to me that Death took time off in Soul Music so that Susan could really understand why her parents preferred to die rather than take extended existence, and finally mourn their loss, which she hadn't done as a child.